Our "Firefly" Halloween; plus, a free "Firefly" pumpkin stencil!

I feel really behind on life right now.  I'm waaaay behind on that promised purse tutorial I mentioned a while back...sorry!  I've made progress on the PDF pattern for it, and readying photos for the blog tutorial, but neither is quite ready yet and I want to post them together.  [UPDATE: Finished, and posted here!]  So....in the hopes of buying forgiveness with a season-appropriate craft:

Actually, that's a bit of an understatement: both our kids are named after characters from the show.  Our daughter, Kaylie, is named after Kaywinnit Lee Frye ("Kaylee") from "Firefly" (yes, I know we spelled it wrong, but her middle name starts with yet another "e"), and my very favorite baby shower gift, from a very crafty dear friend, was this jumpsuit modeled after the one Kaylee wears on the show:


This was Kaylie's first Halloween costume, back in 2011.

So, naturally, Casey and I threw together "Zoe" and "Wash" costumes to match:


Kaylie loved gnawing on the dinosaurs during our photo shoot:


And our costumes inspired me to carve a pumpkin to stick with the theme! 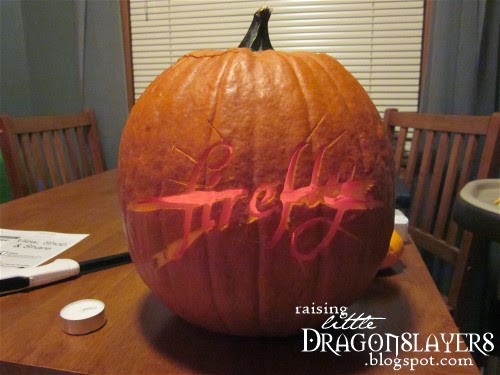 I found a good shot of the logo online, printed it off, and traced it to create my own stencil. 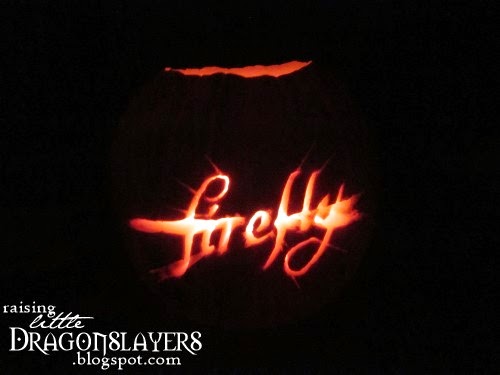 This was my first time experimenting with carving just the skin off in some places while leaving the inner layer of pumpkin pith (yeah, I totally just looked up what that's called) in others, to let differing amounts of light through.  I was incredibly pleased with how it turned out!  It's like the logo was intended to be a pumpkin carve... 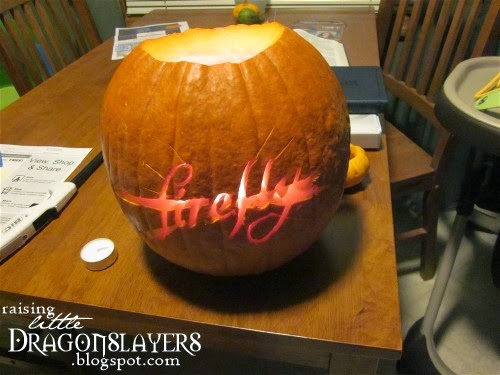 All right, here's the promised stencil:


My scanner was revolting a bit, refusing to make a clean PDF of my original, so I ended up scanning it into a photo and cropping it.  So, you'll want to adjust the size of the image before printing--but I figured you'd probably need to do that anyway, given pumpkin size variation.

After printing, tape the paper to the "front" of your pumpkin, and use a push-pin or thumb tack to trace the design onto your pumpkin.  The sections that are solid black (the letters) will need to be cut all the way through; the white parts outlined in black (the rays), you'll just want to remove the skin of the pumpkin (I recommend using a small blade, like an X-acto knife) so the light will shine mutedly through the pith. 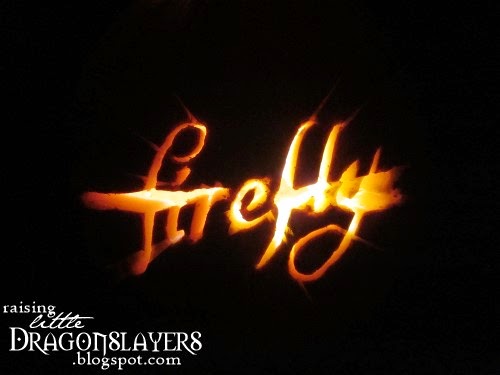 If you use my stencil, I'd love to see a picture of your pumpkin--leave a link in the comments!