Stabled horses often exhibit a particular habit called "cribbing". It's when a bored horse begins chewing on what it can reach from the confines of its stall--usually the wood at the top of shorter walls and half-doors. I always thought that was a weird name for the habit....


Apparently, the name comes from the fact that that's what teething babies do once they can pull themselves up in their cribs.


Clearly, it's not just Kaylie who does this--we're borrowing the crib pictured above for Wil (Kaylie was still in hers when Wil was born, and is now using it as a toddler bed) from some friends with two boys. At least one of them apparently loved chewing on wood as much as she did.

Of course when Kaylie first gnawed through the finish on her crib, I freaked out at the thought of potential splinters lodging themselves in my baby's little mouth. (I don't know if that ever actually happens. First-time moms are allowed to freak out about that stuff, anyway, though.) Fortunately, I had read a blog post someone had pinned on using a yard of fabric to cover the crib rails; unfortunately, I hadn't repinned it and couldn't find it again, so I started from scratch.

Two yards of fleece, numerous snips, and an afternoon later, and that ended the "cribbing" problem.


Kaylie grew out of that phase quite some time ago. She was nineteen months old when we moved to Atlanta, and I don't think we ever put them back on once we got the crib set up in our apartment. But I kept the pieces for when we'd need them for baby #2.

Well, Wil is now eight months old, has his first three teeth, and has been pulling himself up into standing for close to two months now. To my knowledge, he hasn't started chewing on the crib yet, but he's certainly capable of it by now if it occurs to him. So I dug these out and washed them, and set about chew-proofing Wil's borrowed crib two weeks ago (sorry for the lull in posting!). I wasn't sure how well they would fit the crib he's in, since I made them for Kaylie's crib. There's no one-size-fits-all pattern for this project. It definitely doesn't fit quite as well on his, but, fortunately, it should still work just fine.

Sadly, I have no pics of the cutting process, since I first made this over two years ago, but I'll give you the basics on what I did the first time around and post pics of putting it on.

I bought two yards of fleece (definitely get something stretchy!), to be on the safe side, and I was glad that I did. I did end up with some leftover, but I used most of it, and I did use almost the full length. First, I measured the ends and sides of the crib, and added 8-10 inches for each tie (so, length + 16-20 inches). Then I measured bottom-on-outside-to-top-to-bottom-on-inside the part that needed to be covered and added about three inches on each side for the ties (so, width x 2 plus width of top + 6 inches). Once I had all my measurements, I figured out how to best cut the four rectangles (two ends, two sides) from the fabric. 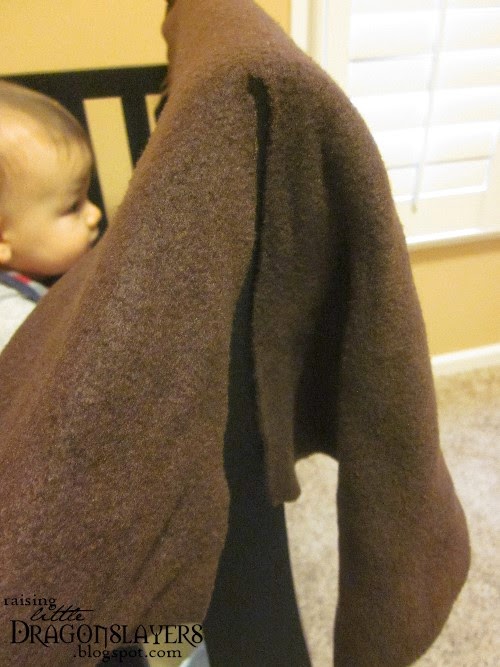 Lay one of your end pieces out on the floor and make cuts on either end for the big ties (measure the piece of railing it will cover and cut the excess on either side). Then center your piece over the railing...


Next, make cuts three inches deep along each slat. Don't bother measuring the width of the slats; it varies crib to crib, and if you are a little off, it's easier to compensate by just eyeballing it--this is one of those projects that is actually easier to approximate than to measure to death like I usually do. Just measure how deep your cuts are (mine were three inches), to be sure they are consistent. And make sure that the cuts are along each slat, not between them (the ties--between the cuts--need to lie between the slats).

I found it easier to cut on the outside, then take the whole piece off, turn it around so the cut side was then on the inside, and make the rest of the cuts on the outside.

For the second end piece, you can either repeat the process, or you can take your finished piece, lay it over the second piece, and make cuts on the second where they are on the first.

Next, do the exact same thing with the side pieces. 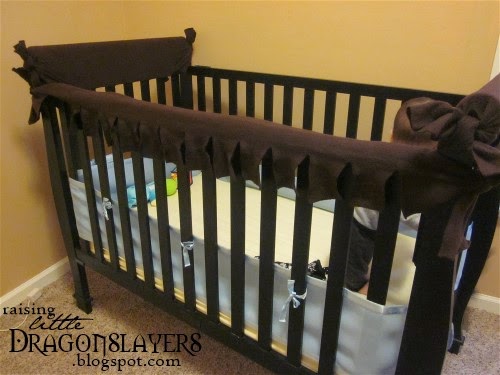 Once all your pieces are cut, tie them all into place!


Since I originally made these for Kaylie's crib, they did not fit as well on Wil's borrowed crib.


The ends were taller on this crib than on Kaylie's, so I had to stretch the fleece a bit to tie it, and then shove it down on the inside so it would reach the bottom.


On Kaylie's crib, both sides looked the way the inside of Wil's does.


A tip: start by tying the ends of each piece in place, and then work your way from both ends toward the middle. That way, if the fabric needs to stretch a little to cover the whole thing, you won't be tugging it to fit as you tie the last few ties on the end.


The very first gap won't have enough slack to tie, but the fabric should still be tight enough to cover the wood and keep those baby teeth from getting to it! 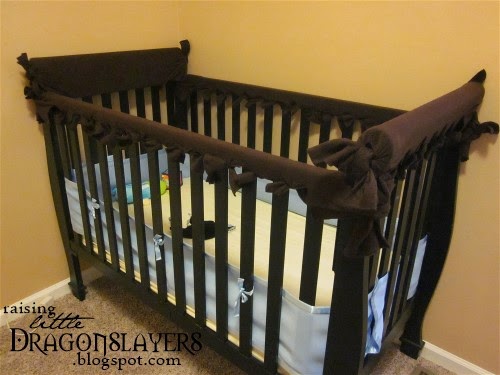 It fits a little funky on Wil's crib (the ends aren't covered as well, as pictured above, and he also has one fewer slat than Kaylie's crib does, so one of the middle gaps has two knotted ties), but it works just as well as it did on hers! All it cost to keep my babies from splinters, buy my peace of mind, and protect our cribs was the price of two yards of fleece--well worth it!
at June 07, 2014