We have an annual pass to the Georgia Aquarium that expires this month, so we all made a trek downtown the other day.


As soon as you enter the building after the ticket line, there's a narrowing hallway between these two walls of fish. There's nothing spectacular about them (they just swim around in a circle, and they're not even pretty), but all three times we've visited, Kaylie has spent at least ten minutes perched on the ledge beside the tank, utterly enchanted. On our first trip, we had a hard time convincing her to move on at all!


And then there's her other favorite part....the waterfall at the entrance to one of the exhibit tracks. No, there are no fish or animals or anything....it's just a waterfall over some rocks. But that's two-year-olds for you!


She's almost three now, and age three is when the Georgia Aquarium starts charging admission (two and under is free), and they have got that pegged. 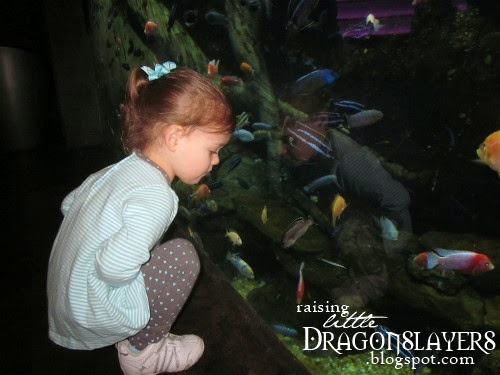 Kaylie will be three next month, and this was our first trip where we felt like she was really able to enjoy all the exhibits (except for the touch-and-feel pools--she still doesn't want to touch anything in the tank, though she likes dipping her hands in the water).


They had a pair of albino alligators, but I'm not sure we were successful in convincing Kaylie that alligators and dinosaurs are not the same thing.


They were feeding the three beluga whales when we got to this exhibit, so they were really close to the glass, but the food must have been good, because we didn't see much more than their tails!


That's okay, Mom; I'll just jump some more. (In fact, I'll jump right into these nice strangers over here, since you're four steps too far away to reach me in time! Yes, she did.)


I was super excited for Kaylie to go to the dolphin show. The first time my mom and I took her to the aquarium, we went to the dolphin show, and Kaylie, at almost two years old then, was very overwhelmed. We didn't even try going to it the second time. But I figured she was old enough now to enjoy it, and she did! Casey got to take her, since I had to stay with Wil (who spent nearly the whole trip just chilling in his stroller--he's so laidback!), but she loved it.


And this is what happens when you tell Kaylie "Look at me!" while you're trying to take a picture. (Thank goodness for digital cameras! You other parents know what I mean. Though this is still often the best we can get....) 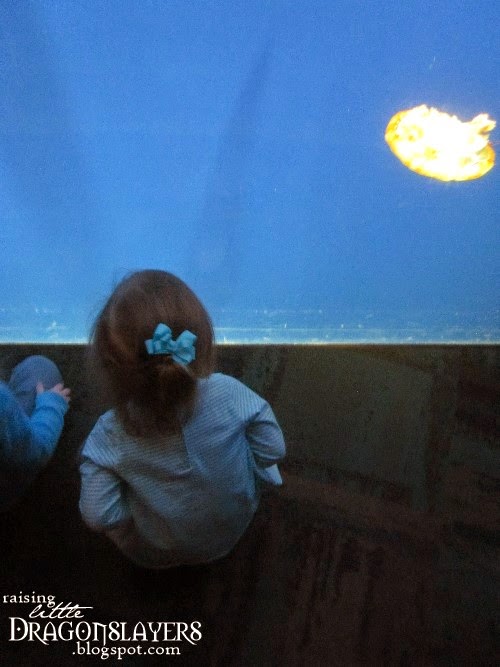 We were about ready to call it a day after the dolphin show, but we've watched enough Finding Nemo that Kaylie did want to see the jellyfish (like the ones that Marlin and Dory swim through). 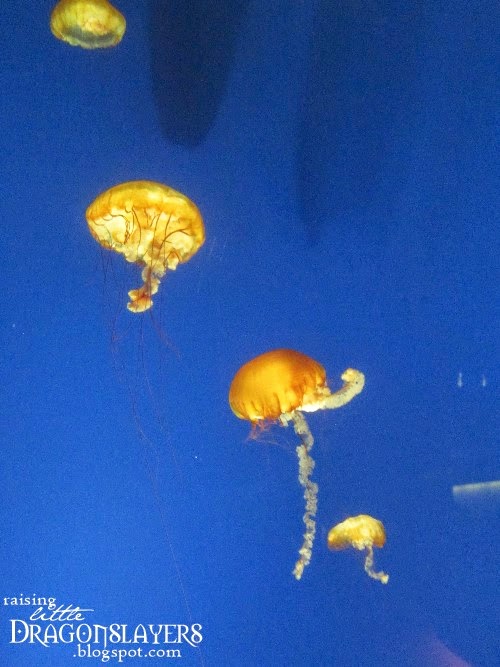 Bizzare creatures. But very relaxing to watch, so it was a good way to wind down at the end of the trek. 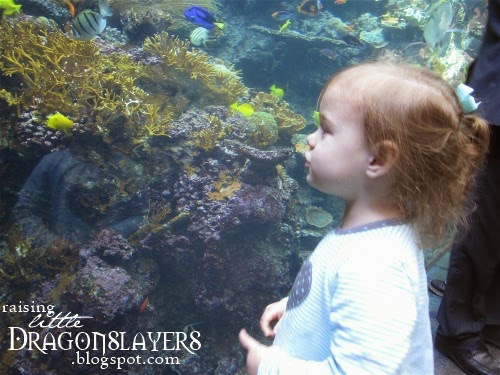 We stopped at one last large tank, full of all kinds of colorful fish. We didn't see any "Nemo" fish, but we did find a few "Dory" fishes! Those were Kaylie's favorites.


"Kaylie, look at me and smile!" Yeah, that's about as good as it gets.

It was a fun day! When I bought the annual pass almost a year ago, I was six months pregnant and we lived five minutes from MARTA, which we could take almost right to the aquarium, so I had all these plans of taking Kaylie for little trips during the week to get out of the apartment.....but instead of my morning sickness going away by my last trimester, it just got worse. So, while we've gone enough times to pay for the pass, we didn't get as much out of it as I hoped to. I think we'll wait to renew our pass until Wil is old enough to enjoy it, too, but I am loving living in a big city with these sort of attractions to take our kids to!
at June 10, 2014