It's something of a tradition among the women of my husband's side of the family: little girls get a dress-up box on their third birthday. My mother-in-law suggested it to me ages ago (I don't remember if I was even pregnant yet at the time), and, as I thoroughly enjoyed playing dress-up as a child, I loved the idea. So I'd been keeping an eye out for thrift store finds and post-Halloween sales for quite some time, and both my mother and mother-in-law made considerable contributions as my daughter's third birthday neared.

Kaylie's birthday is still a week away, but my mother-in-law, who is a teacher on the other side of the country, visited us last week on her spring break. It seemed a good opportunity to celebrate a little early, so she could give Kaylie her contributions in person, so we planned a pre-birthday--complete with cupcakes--for this past Saturday.


She was, as any child her age would be, very excited to open presents!

I thought she'd also be excited at all the new stuff inside.

She opened and quickly discarded a set of fairy wings from Grandma Carol, and then started on the first of three wrapped boxes. She opened mine first, and, in record time, emptied it by fistfuls, ignoring my attempts to interest in her individual items. "Kaylie, look! It's a ____! Would you like to try it on?" "No, no, no!" And she moved on to the next box. 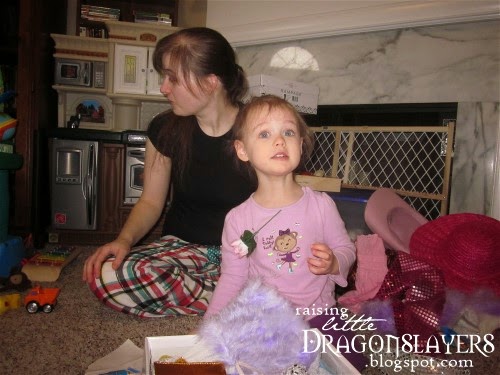 Until this little pin-on flower. Finally, we got a "Wear it, please?"


Of course, she wanted it right off again within a minute.


And she liked this feathery fan.


Not wearable, but at least she didn't toss it aside. 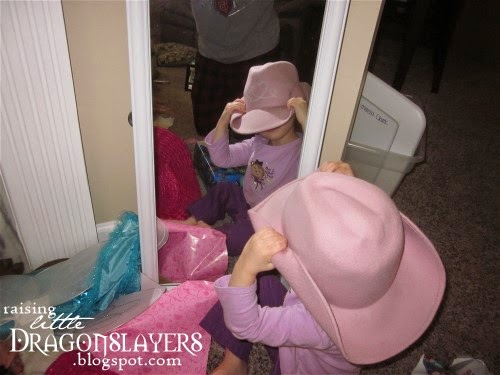 In the end, this cowgirl hat was the only thing we could get her to wear. She LOVES all the Toy Story movies, so she's a big fan of cowgirls and cowboys (like Jessie and Woody).


She fetched her horse, Rody (of whom she always says, "His name is Rody, but I call him Bullseye") and rode around the living room for a while. 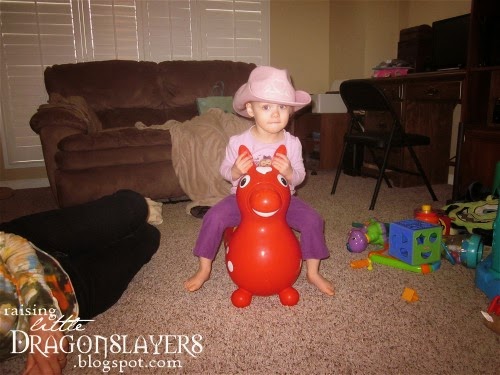 
She did eventually get off the horse to put on every single necklace she got in this haul along with what she already had.

(And this, by the way, is how we do birthdays with both sets of grandparents living across the country from us--Skyping on multiple mobile devices. What a world our kids are growing up in!)

So, my daughter has a dress-up box overflowing with princess dresses, tutus, fairy wings, and sparkly magic wands....and, in the days since, it has been like pulling teeth to get her try on anything but the cowgirl hat, the only things she has asked to dress up as are a cowgirl and a pirate (which we don't have costumes for), and she uses one of the wands primarily as a "bat" to whack a ball around on the floor.

Disappointment and pride have warred in my soul these past few days.

On the one hand, we acquired all this adorable girly dress-up stuff that I would have loved wearing as a kid. I especially love the princess dresses--and, in our defense, Kaylie did ask just two weeks ago to dress like a princess! (She had just met a girl in our neighborhood who was dressed as Cinderella.) So I'm disappointed that this gift that I've been putting together for literally months was such a flop.....

But I'm also the mom who dressed her as a pirate for Halloween when she was one and too young to give her own input, mostly so I could dress like a pirate and take her trick-or-treating--and then let her re-wear the costume the next year, because she asked to. I'm the mom who has been stockpiling classic My Little Pony toys from garage sales and giving them to her at birthdays and Christmas in the hope that she'll love horses like I do, and now sits through the 1986 MLP movie because she likes it better than the new series (I grew up on it; it has a special place in my heart; but after 50 viewings, it gets a little rough). I'm the mom who has swordfights with her, makes toddler armor out of empty toilet paper tubes, and crawls around on all fours to give her horsey-back rides. So when my little girl takes one look at a boxful of girly princess-y things* and says, "I don't want to be a princess--I want to be a pirate!", I can't help but feel proud of her. She's being her own person, and I love it.

It's also okay that she was more excited about the wonders of Scotch tape, and wanted to play with the pieces instead of unwrapping the rest of the first present. She's two. Well, almost three, but still. The point is, kids will like what they like, and that is okay.

Anyway, I did manage to talk her into trying on one of the princess dresses yesterday.


She actually wanted the angel wings and halo to go with it! Progress!

(If it seems like I'm pushing her, you should know: Kaylie is often extremely reluctant to try new things. We have to push. If she doesn't want to do it again, that's fine; but half the things she loves to do, we had to make her do the first time.)


I convinced her to try on the Merida wig by reminding her that Jessie (from Toy Story 2 & 3) has red hair under her cowgirl hat.


Of course, while I am confident that she will come to enjoy dressing up in the clothes she now has (if we can just get her to try it a few times--that's typical Kaylie for you), I also want to encourage her to dress up as she wants to dress up. So last night, after much fruitless online shopping, I dug up the Halloween costume she'd worn the last two years (it's a little small now, but the other pirate costume I'd already bought for her is still way too big), and I found pair of cowgirl boots I bought ages ago that are still a couple sizes too big.


She LOVES the cowgirl boots! I couldn't find an affordable cowgirl or cowboy costume online, so now I'm brainstorming how to make her dress-up chaps or something. 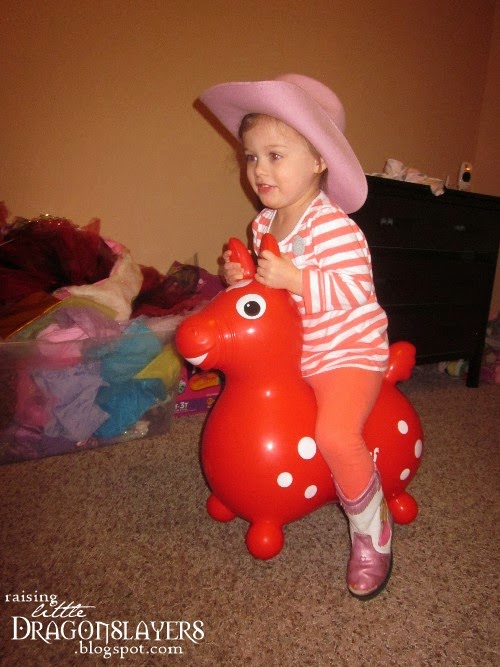 Really, the hat and the boots are what make the outfit, anyway.

And this morning, as soon as she got up, she asked to dress up like a pirate. So we went straight from pajamas to this: 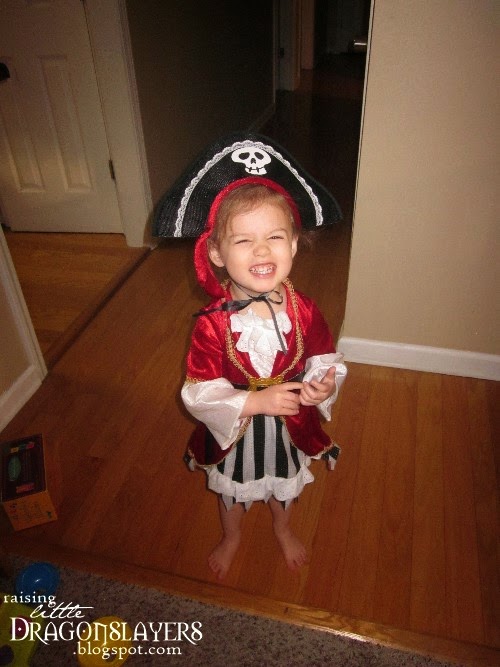 That's my girl! My stubborn, independent, contrary girl. :-) Gosh, I love her.

*Just to clarify: There were actually a couple of "boy" outfit pieces in the box, too; just not, apparently, ones she was interested in. (And she's had a set of fairy wings with a matching tutu since Christmas that she regularly wears around the house, so getting her more girly things didn't seem unreasonable!)
at June 22, 2014