Dragon Con 2015 will be my third convention, ever, and I've decided it's finally time to try my hand at cosplay.  As such a novice, I'm a bit nervous--there are some amazing cosplayers at Dragon Con, so it's a bit intimidating to think of brushing shoulders with them while garbed in my own feeble attempt at cosplay.  But I've met enough welcoming folk at Dragon Con over the last two years that I've decided to go for it, despite my insecurities!

I took care of some of the simpler pieces of my cosplay first, before tackling the two most daunting parts--the gun and the belt.  I'm putting a steampunk twist on a well-known character, so of course I needed some sort of steampunk gun.

I browsed through quite a few Nerf-gun-turned-steampunk pictures and tutorials before stumbling, quite accidentally, on this on Pinterest.  No tutorial, no notes, no text except in a language I don't speak--but it was exactly what I was looking for!  So I did what I do best: I winged it from there.


The first step was finding suitable guns.  I loved the ball bit on the pin I'd seen, and the way a section of the water gun fit around the barrel of the pistol, so I scoured Amazon for a similar water gun.  After tracking down a cheap pirate pistol and comparing its measurements to my options, I found one I thought looked promising.  From there, I just thought ahead to potential obstacles--like needing a hot knife to cut the plastic, and how to fill the holes cut open in two hollow guns--and put together a pile of supplies to pull it off. 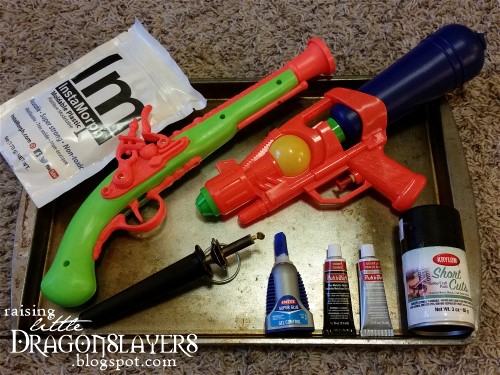 I used a few things from the crafting stash I've already accumulated over the years--like the super glue, spray paint, and acrylic paint.  Since I already had a woodburner (for various other projects, very few of which involve wood!), I opted to try that before shopping for an actual hot knife.

First step: dissecting the guns.  These are what I started with: 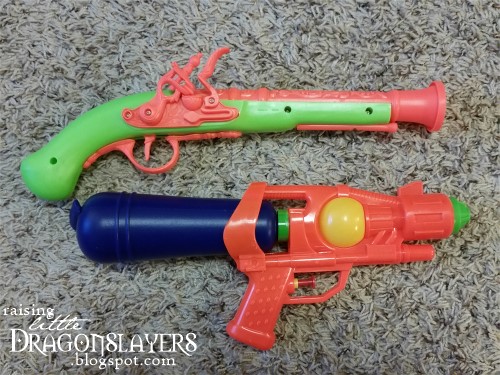 Here's the water gun with the tank unscrewed and set aside: 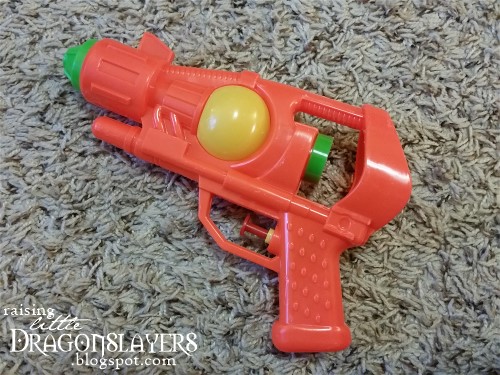 I stared at it for a good ten minutes before starting, just determining which bits to cut off and what to leave intact.  It's good to go into this step with a plan, and a thorough understanding of how each piece connects to the whole.

I used this tip on my woodburner: 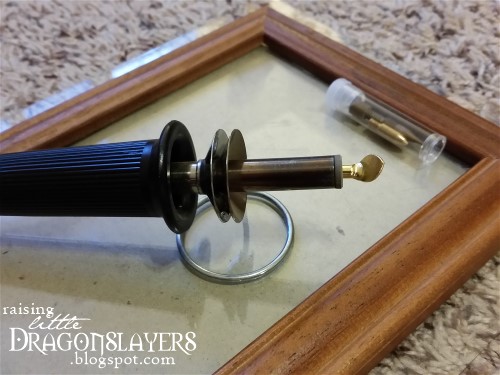 Hard to tell from this angle, but it's flat like a leaf, and it was the closest tip to a flat "knife" as I had.  It worked just fine for me, though.

I set up my woodburner and a work area (I used an edged cookie sheet, which wouldn't be damaged by the woodburner or hot plastic) out on the back porch--I started off indoors, but this step created some very unpleasant fumes!  I figured it was safer to work on it outside.

Here are the pieces I ended up cutting off of the water gun: 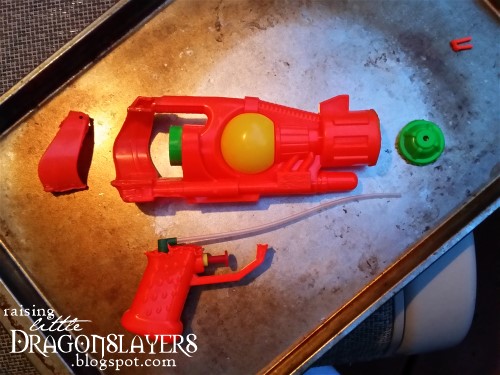 And here are the pieces I cut out of the pirate pistol: 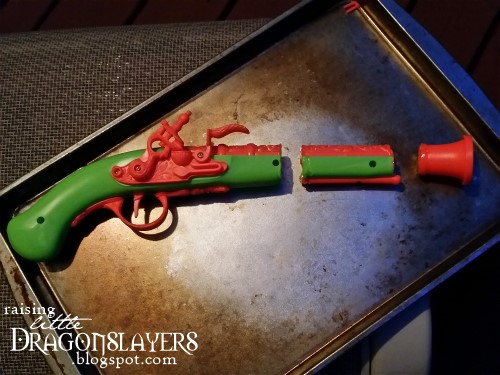 I brought all my pieces back inside and laid out the ones I wanted to use: 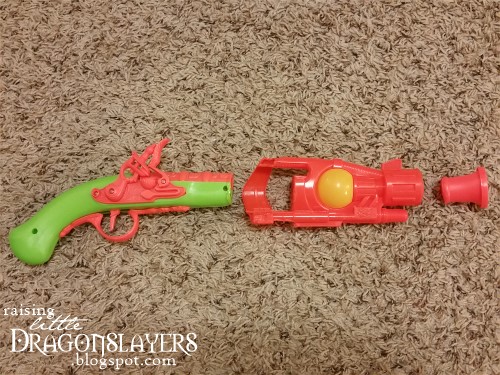 Next came reassembling the gun.  For this, I planned to fill any holes or gaps with the moldable plastic, and fit the pieces together, gluing everything in place.

I followed the directions on the back of the bag for the InstaMorph moldable plastic.  It starts as tiny white plastic balls, which you pour into 140*F water, and they stick together and turn clear in two minutes, at which point you can fish it out and shape it until it cools. 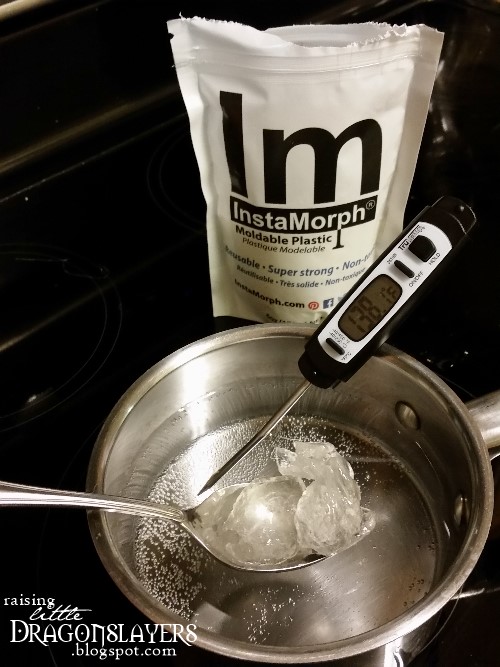 Every piece of this step took me several tries.  The plastic cools rather quickly, and if you start with the wrong amount, adding more leaves quite a line where the new stuff joins the old, and pulling some off to leave yourself with less stretches out the bit you've already started shaping.  I found the best method was to just play around with it until I had the correct amount of plastic, then re-submerge that lump (keeping it separate from what was left in the saucepan) for a good two minutes, to give myself the maximum amount of time to shape it once I'd fished it back out. 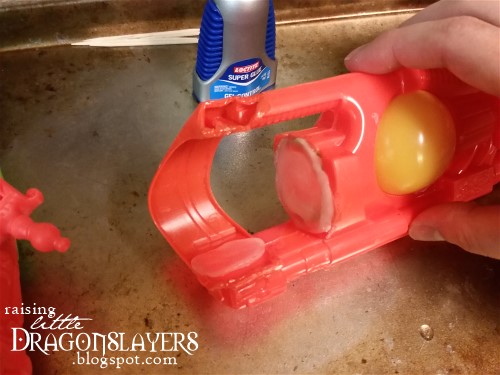 Next I added the bit of plastic that would go beneath the barrel of the pirate pistol, to do away with the gap, since that piece on the side had a wider circumference than the pistol barrel and I wanted more than one point of connection between the gun pieces.  Again, I figured out the right amount of plastic, reheated it, shaped it, pressed the pirate pistol into place to ensure the fit, removed the plastic before it hardened completely, added glue, and replaced it, using the pirate pistol to press it into place as the glue dried.

Once both pieces of moldable plastic were solidly glued in place, I smeared super glue onto both pieces where they would meet the pirate pistol, then glued the pistol into place, pressing firmly: 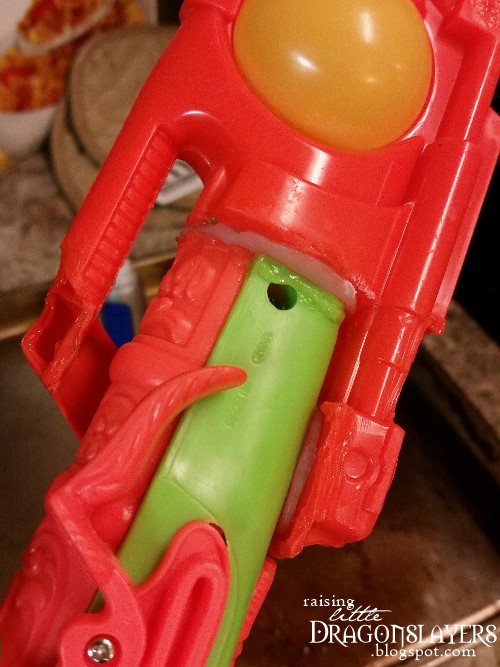 As you can see, it isn't perfect--it would have been nice to have cleaner lines, rather than those lumpy, rounded edges where the plastic is--but it gets the job done.

Next came filling all the other holes left from removing pieces of the water gun: 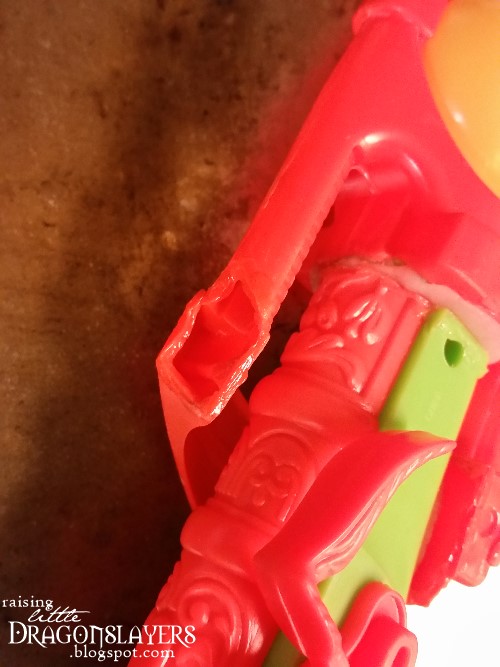 I followed the same basic steps of determining the amount of plastic needed, reheating it, shaping it, removing it, and gluing it, for each hole. 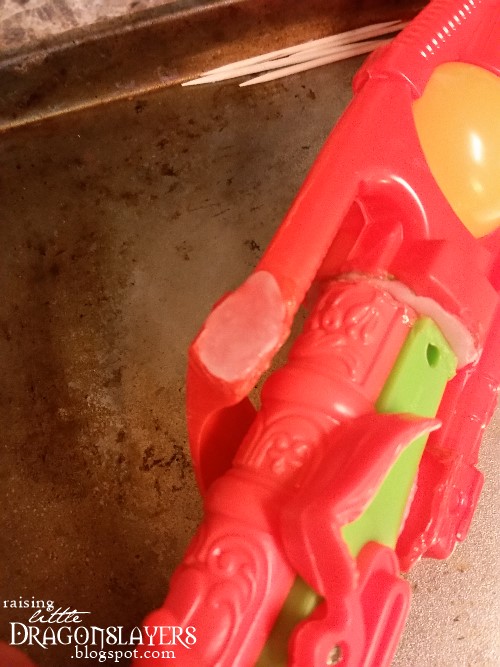 Once I'd glued it, I tried to smooth out the edges as best I could.  After getting an annoying bit of super glue on my fingers, I figured out that it worked better to cover my fingers in plastic wrap (the kind you cover leftover food with), so I didn't have to touch the plastic and glue directly.

I filled in the hole left by the water gun's trigger assembly as well, then moved on to connecting the muzzle from the pirate pistol to the front of the water gun.  That was the hardest part, but I'm not sure there's an understandable way to explain exactly how I did it, without using pictures; but part of the problem was that I needed to fit everything perfectly quickly, so I really didn't have time to photograph the process.  In summary, I inserted the barrel-end of the muzzle into the water gun, wrapped a thin piece of plastic around where the pieces joined, and glued it all in place.

Here's a shot of both sides of the pieced-together gun: 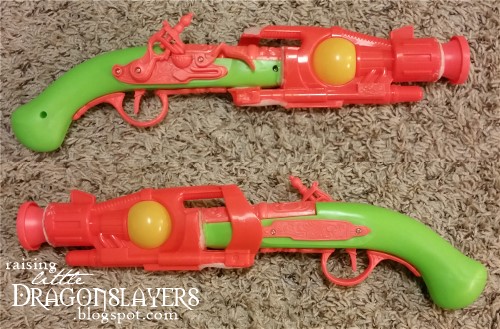 Definitely starting to come together!

The next step is painting the gun, starting with spray-painting the base coat.  No matter what your plans, you'll want to use a color you don't mind showing through.  I went with a black base coat for my black-and-silver gun. 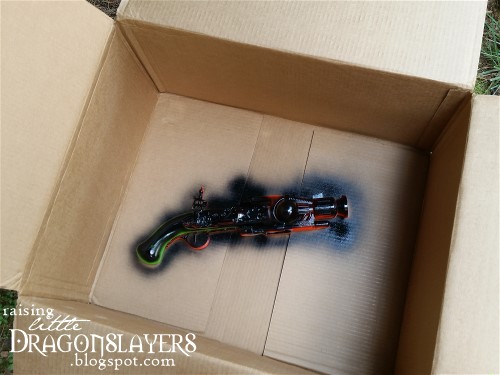 I spray-painted one side at a time, reaching into my cardboard box to get every nook and cranny of the gun that I could.  Following the directions on my spray paint, I let the first side dry for about an hour and a half before I flipped the gun over and sprayed the other side just as thoroughly. 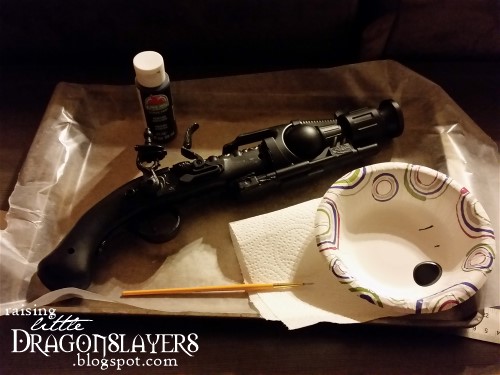 Still, after letting it dry for a couple days, there were bits that I had to touch up with matching acrylic paint.

Here's a shot of both sides, once the base coat was finished: 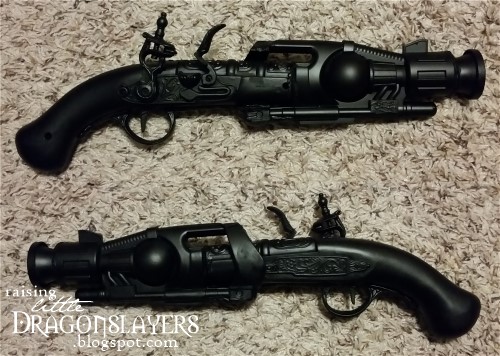 I actually really liked the way it looked, all black like this--very sleek.  I considered leaving it there, and part of me still thinks I should have--but while I think the front half looks better all black, all the flourishes on the pirate pistol definitely needed to stand out with a metallic accent color. 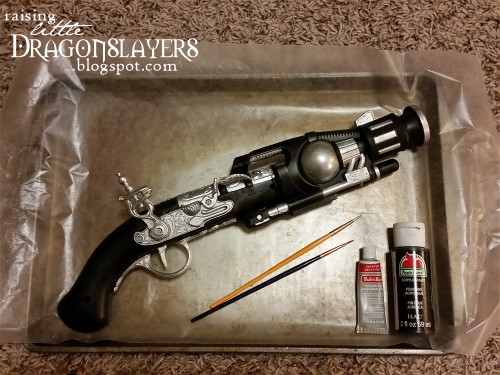 Finally, all I had left was to apply the accent paint and finishing touches.  I had originally planned to use Rub'n'Buff (which so many steampunk crafters swear by--this was my first time using it) in two colors--silver leaf for the accents, and ebony for the rest.  But after finishing a coat with the silver, I started applying the black, and realized that I actually liked the matte better.  I think part of the problem was that I used a paintbrush, rather than my finger, to apply the Rub'n'Buff--it's a very waxy substance, and it's hard to apply much pressure with a paintbrush, so the silver wasn't smeared around as smoothly as I think it was meant to be.  But I just had too many tiny details that needed to be painted where my fingers wouldn't fit, and there were enough parts where I knew I'd encounter the same problem with the black--so I opted to leave the nice, smooth base coat unmarred, rather than risk ending up with a rougher finish.

Here's the finished product, from both sides: 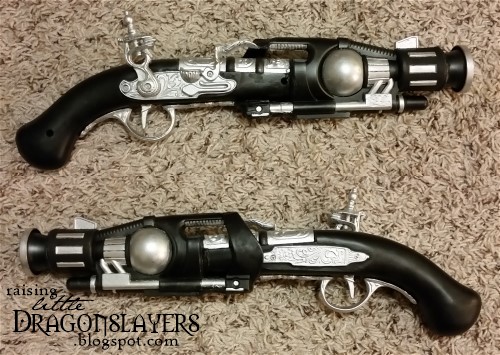 There are a few parts that I actually went back and touched up again after taking these pictures, like the back of the hammer: 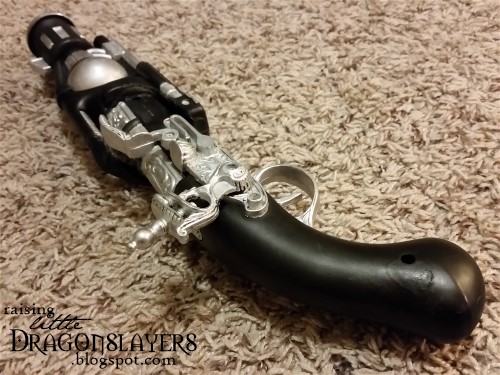 And some of those rectangles near the muzzle: 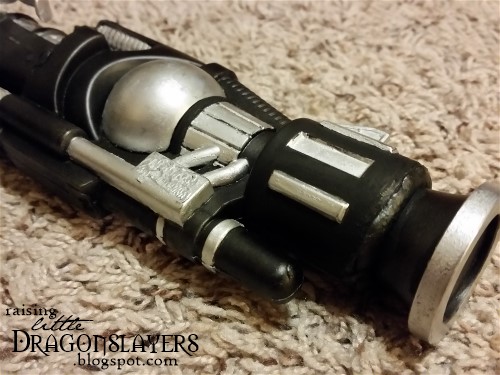 The perfectionist in me has a hard time with finding the right balance between painting in every crack and cranny, and leaving a bit of the base color showing for a worn effect.  I'm not skilled enough yet to even attempt adding battle damage to a project like this, so I wanted to leave a little black showing in some of the deeper crevices, as if some grime had been left behind by the last few cleanings, but it was hard to know how much. 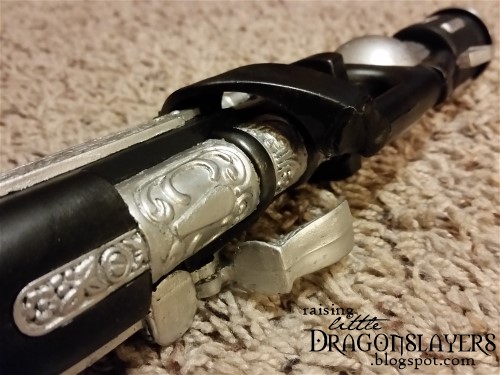 In the end, I was pretty happy with how it turned out, especially given that this was my first time tackling a project like this! 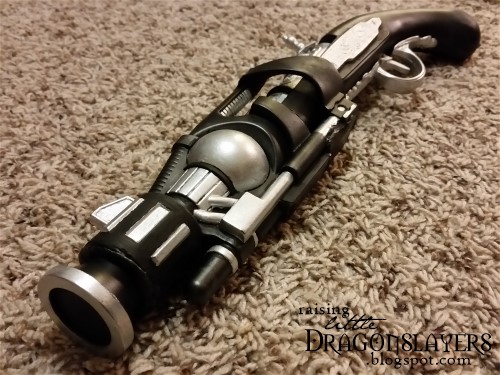 Have you ever tried your own steampunk gun mod?  If so, I'd love to see pictures!  In fact, feel free to share pictures of steampunk anything you've crafted--link it in the comments! :-)
at July 16, 2015