I don't care what it says on the box, 28 is NOT too old to play with LEGO.

Today, I blew off being a grown-up.  Instead, I did this:


I have been accumulating these "Lord of the Rings" and "The Hobbit" LEGO sets for a couple of years now, but until a few days ago, I had nowhere to display them put-together, so they stayed packaged in pieces in their boxes.  But I finally managed to clear the last of my craft stuff off of the game cabinet (and into my awesome new craft area downstairs!) over the weekend, and I just couldn't wait any longer to break into them! 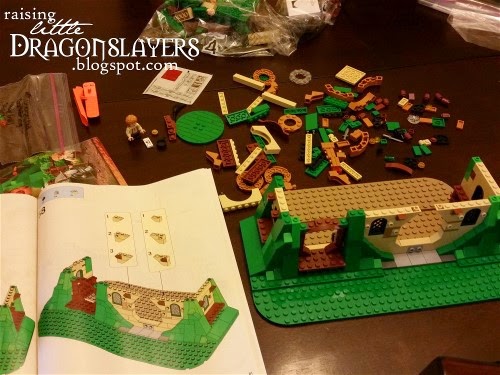 Fortunately, and a little surprisingly, both of my kids actually cooperated with that plan (don't worry, they still got fed and stayed relatively clean all day).  Wil was very content to "build" with his own DUPLO (the toddler version of LEGO), and Kaylie loved watching me put together the LEGO pieces--every few steps, I'd let her take a closer look (and even hold) the work-in-progress.  She really loved the Helm's Deep wall in particular, though she was confused by the lack of a bathroom and was very curious what the soldiers would do if they had to go potty--that's a three-year-old for you!

Bag End ("An Unexpected Gathering", set 79003) was definitely my favorite--this was the one I saved mostly for naptime today.  So many details!


I love that the green door even has Gandalf's rune on it.  And the little round windows!  So cute!

But the details on the inside really take the cake...or the pretzel.  Which it has. 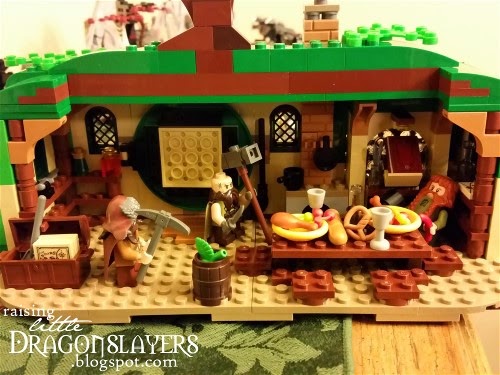 There are three little maps in the chest--Mirkwood, the Shire, and Thorin's map--and a book (that actually opens, and has "BB" on the cover, so I assume it's meant to be his "There and Back Again") on Bilbo's writing desk.  Sting is displayed on the window sill on the far left, and would you take a look at all the food on the table?  By the way, I was also amused that three of the dwarves were given weapons, but all Bombur gets is a sausage.... 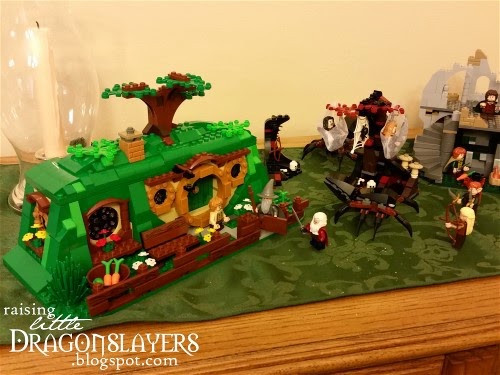 I bought the Mirkwood spiders set ("Escape from Mirkwood Spiders", set 79001) mostly because I didn't have any elves yet (I'd already acquired my other three sets by the time I stumbled on this one on sale).  Coincidentally, I also didn't have any girls, since so many of the series' characters are male, so getting Tauriel along with Legolas was a plus. 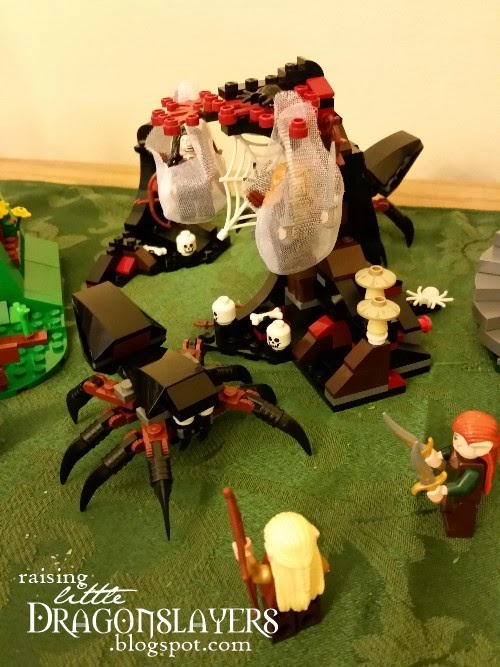 There's a second spider behind that tree (in which Kili and Fili are ensnared).  I thought LEGO did a pretty good job making them appropriately creepy--can you see those fangs? 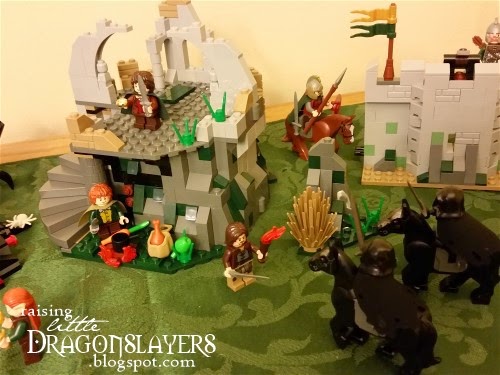 Unfortunately, it doesn't lend itself as well to display as it would to play.  Not only are both sides of the structure interesting... 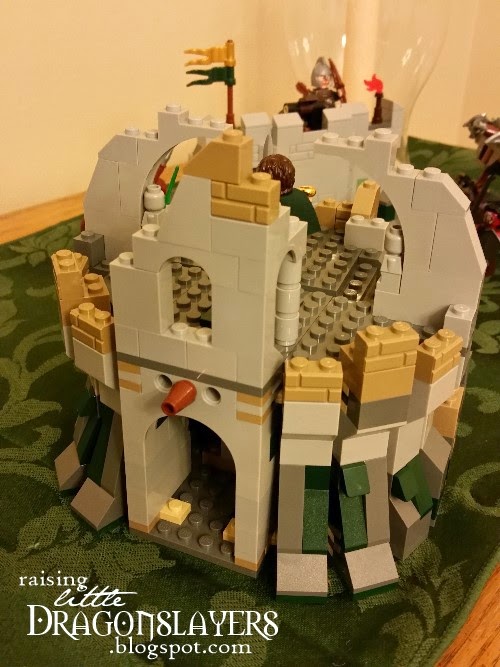 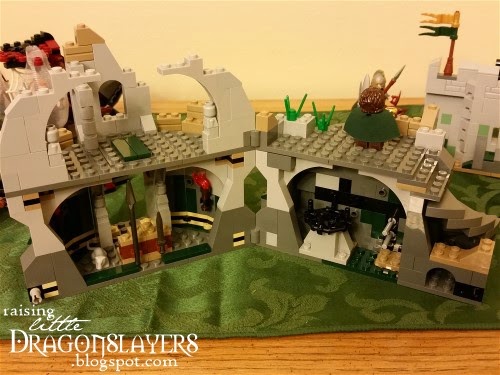 There are arches and torches and weapons and statuettes and even a little rat, and those green panels on the top level of the left side are on a panel that's a trapdoor, and those two little white-handled stick-thingies on the bottom right can be shot out the other side.  (Actually, everything but Bag End has something somewhere that can actually be shot!  I forgot how fun LEGOs can be...) 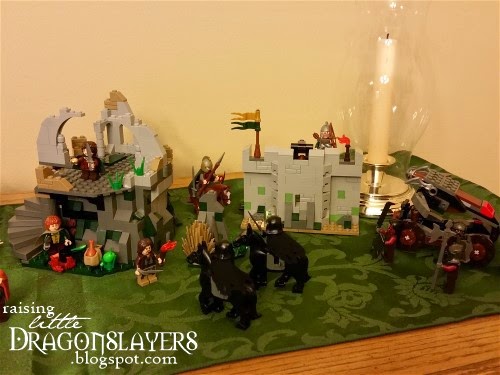 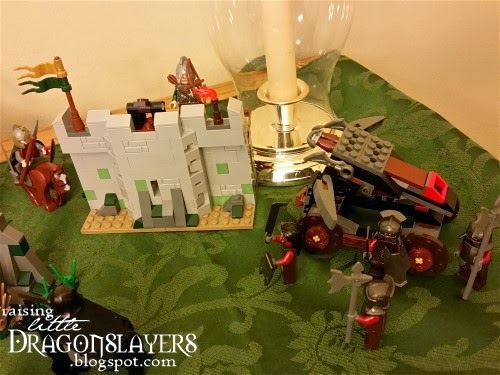 There's a small wall section (it's even made to be snapped onto the full Helm's Deep set) defended by Eomer and a soldier, and a siege engine (which fires) accompanied by a company of Uruk-hai.  This was the first set I put together this morning, hence it capturing Kaylie's interest for the rest of the day--plus it was a lot easier for her little hands to hold the wall section than Weathertop! 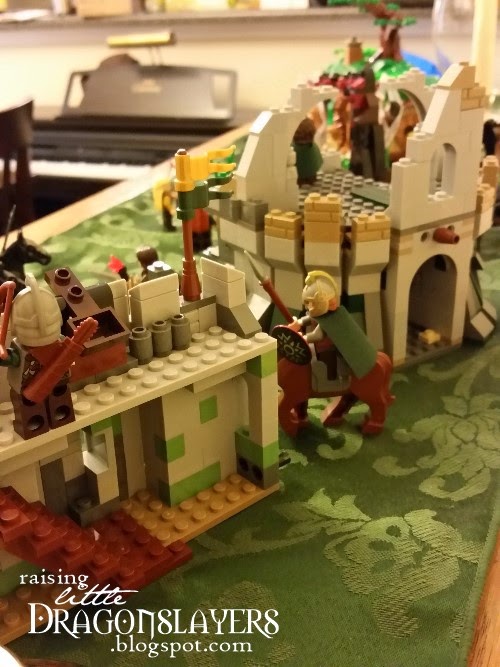 I retook pictures of the backs of the other ones, but not this one--you can still see in this shot that there's a small catapult on the top, and stairs from the bottom level to the top (but no bathroom--sorry, Kaylie!).

It's amazing how far LEGO has come even since my childhood.  These sets had so many tiny little pieces to angle every awkward corner and fill every gap--there isn't a single part that looks unfinished, and it's gotten less blocky-looking than it even was two decades ago (and I thought LEGOs were pretty great back then!).

One of the changes is that THE HORSES ARE COMPLETELY DIFFERENT.  I was more than horse-crazy as a kid, so I had every model of LEGO horse available except for the foal, which was only available in a very rare mare and foal set.  Now, every edge has been smoothed, additional details are painted on, and...THEY CAN REAR!  Not only are horses no longer only available in one position, but you can pick which position each horse goes into.  That's pretty cool. 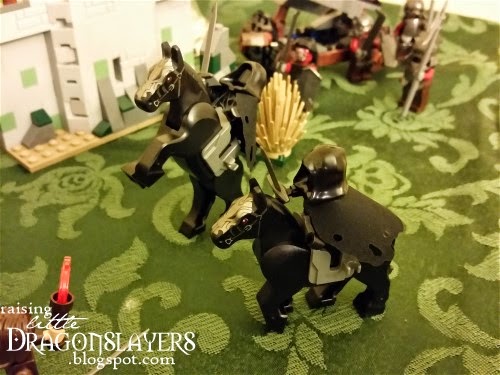 Also, apparently characters now come with two facial expressions--one on each side of the head piece, so the one you don't want is in the back, covered by the hair.  Here's one of Aragorn's: 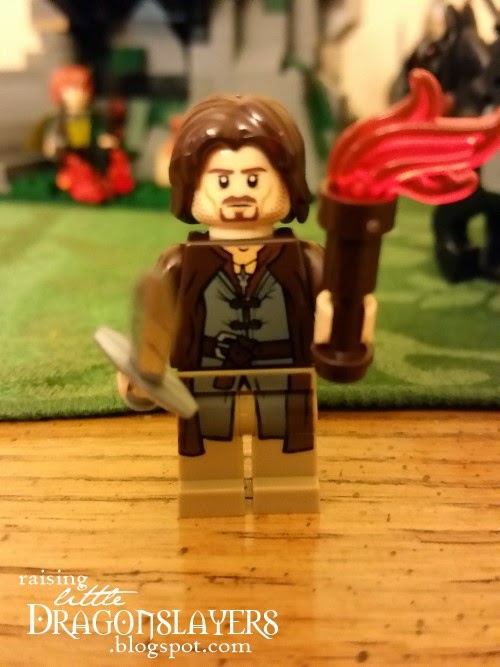 And his other facial expression: 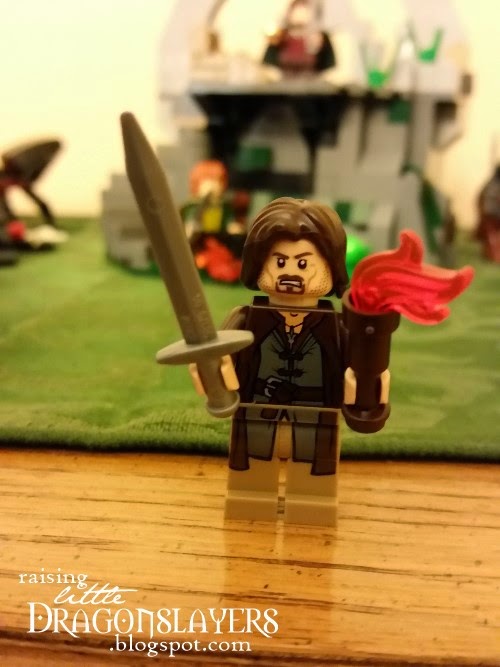 Each character seems to come with one general-use, somewhat grim/intense facial expression (hey, it's stressful fighting the forces of Mordor), and one "battle face", which is more of a grimace.

Except for Frodo.  Here's his "normal" face: 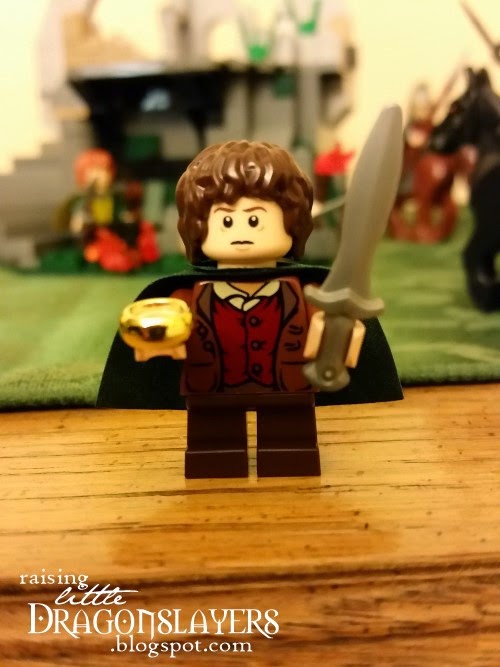 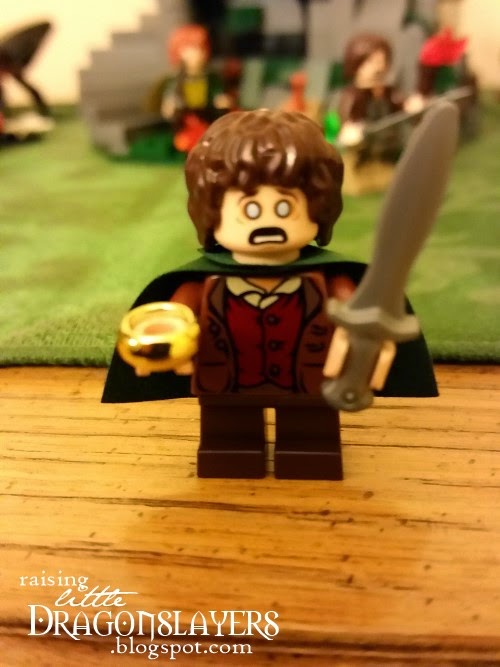 It's more of an "I've been stabbed by a Morgul blade" face.

It was fun today, putting together my own little LEGO Middle-Earth, instead of just making castles and houses and pools and playgrounds out of DUPLO for my kids (and with their constant "help"--which is fun in its own way, but leaves me feeling like I've made very little tangible progress, which is something I'm wired to need a little of).  Today makes me itch for more, whether it's the Mines of Moria or big Helm's Deep sets I'm now drooling over, or a time when my own kids are old enough to start buying LEGOs for.  I love the creativity that these toys are designed to foster!

Also, I now have the coolest dining room decor/display of anyone I know: 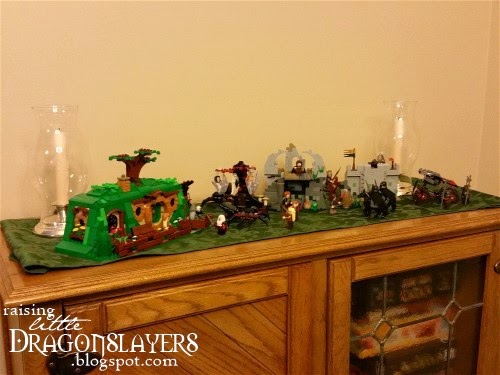 (I don't even know where Moria or Helm's Deep would go, if I got them!)

I loved playing with LEGOs as a kid, and even though I bought these ones for display (and thus stuck to the directions this time), today felt a lot like playing!  So, tip of the day: Play more!  No matter how old you are. :-)
at March 11, 2015