I love books.  I love bread.  So, here's the first post in a series about bread in one of my favorite book series, "The Hunger Games". :-)

Bread is quite a theme in HG.  One of the three central characters, Peeta (anyone else think of pita?), is a baker, and Katniss' first memory of Peeta is of him giving her burnt bread (which kept her family from starvation).  The country, Panem, is named from the latin phrase "panem et circenses", meaning "bread and circuses".  And in the second book, rebel leaders use bread from different districts to send messages to the tributes in the arena.

I'm hardly the first to wonder what each of the districts' bread was like.  Suzanne Collins describes only a few of them, but given how central bread is to the story, surmising about all twelve seems like a fitting tribute (pun intended) to this fantastic trilogy.

Up first: District 1.  Though no information is given about the bread of this district, we do know that District 1's primary industry is manufacturing luxury items for the Capitol.  I would therefore imagine that their bread would be something fancier than many of the other districts; so, naturally, I looked to bread types served in what we commonly hail as the culinary capital of the world: Paris.

A "brioche" is a type of French pastry known for being richer than ordinary bread due to a high egg and butter content.  Often filled with fruit or chocolate and served as a dessert, it seemed like the perfect sort of bread for the luxury district of Panem.

I primarily used this recipe for this bread, with a few minor adjustments. 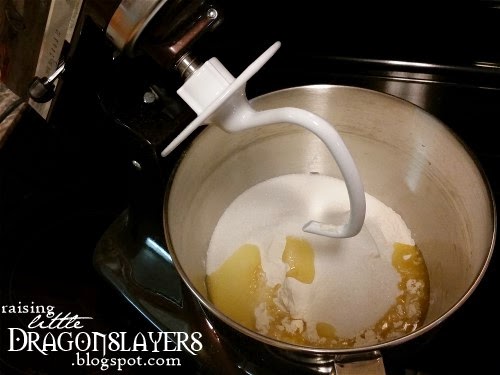 I cheated and used my stand mixer. 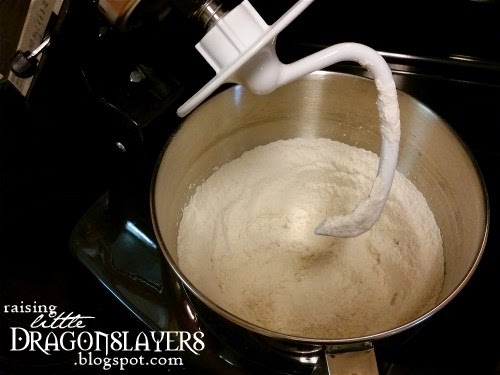 My goal with each of these breads is to find a bread that the people of that district could feasibly make: avoiding pre-made or pre-packaged ingredients, and making everything as much from scratch as possible.  But even though I'm pretty sure no one outside of the wealthiest districts could possibly have had a stand mixer, I LOVE MINE AND I'M GOING TO USE IT FOR ALL TWELVE.

Next, add the eggs to the flour mixture: 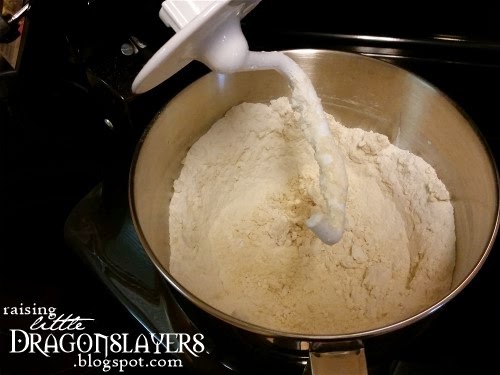 Preheat oven to 125 (degrees Farenheit) and turn off.

Dissolve the yeast in the lukewarm milk: 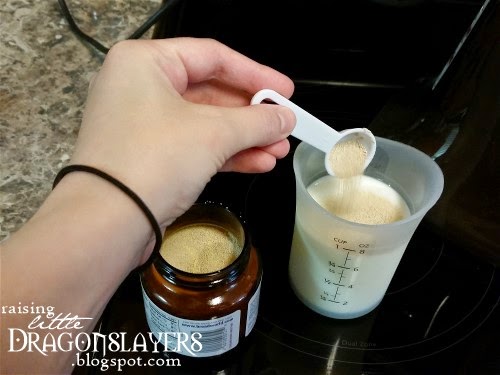 The colder the milk, the more trouble you'll have dissolving the yeast.  (Ask me how I know.)  So try to set that milk out a good bit ahead of time... 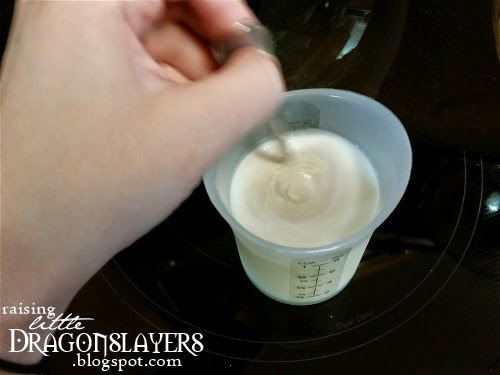 Next, slowly add the milk to the flour mixture: 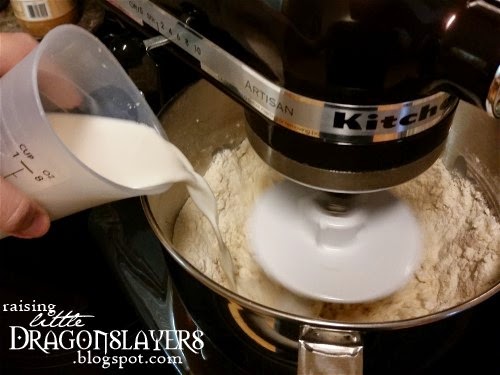 In the end, you want the dough to be smooth and even. 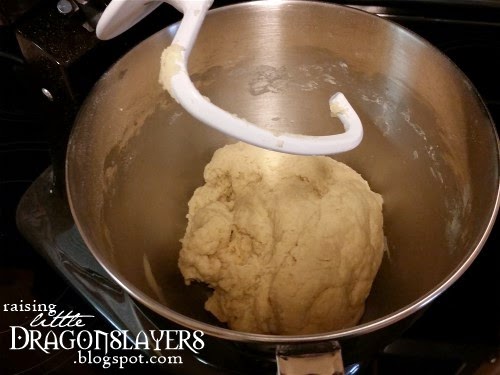 (Mine's a little lumpy, but it worked.)

Let the dough rise, uncovered in an oven-safe dish, in the warm oven, at least one hour. 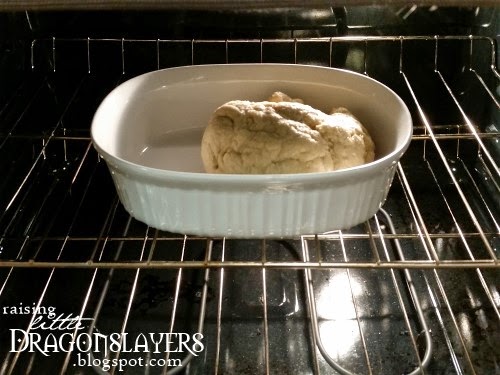 While you wait for the dough to rise, get started on preparing the dark chocolate. 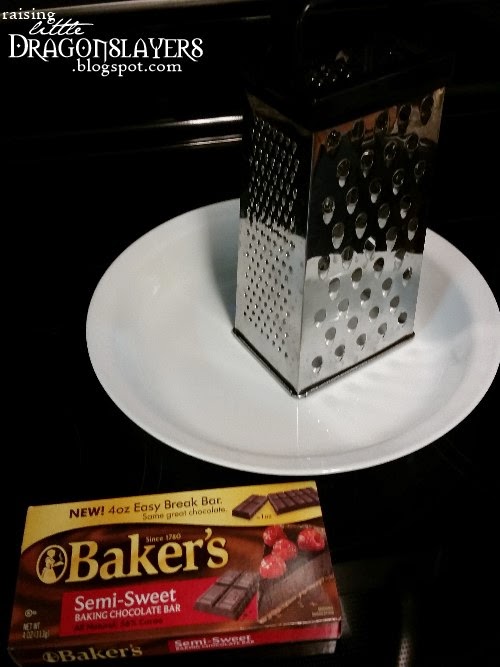 Grate two ounces with a cheese grater into a shallow dish:

(I grated it on the larger holes until I began to worry about grating my fingers; then I used the smaller holes, which felt less dangerous.) 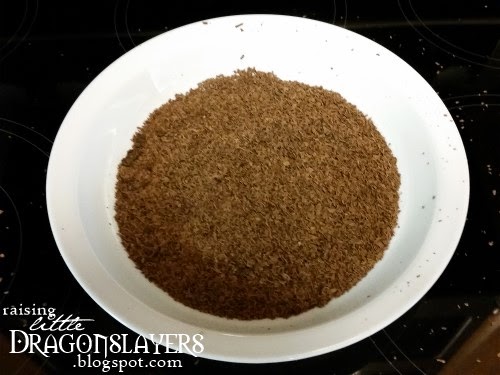 Alternatively, you can use mini semi-sweet chocolate chips.  But since I cheated by using a mixer, which I'm not sure even people in District 1 might have, I wanted to keep the ingredients as authentic as possible, and I'm not so sure Nestle would have survived the demise of the world as we know it.

After at least an hour, remove the dough from the oven (and use potholders--even with the oven off, that dish can get hot). 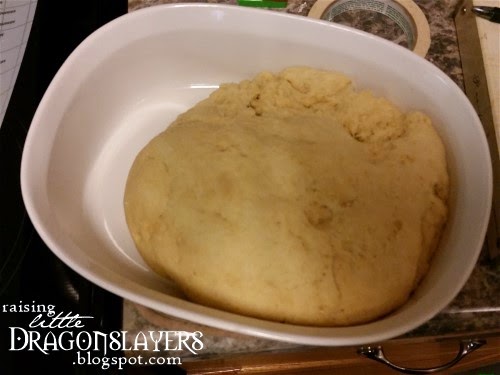 Put one half back in the dish for now.  With a rolling pin on a floured surface (I used a pastry mat), roll out one of those halves into a squarish-rectangularish shape:


Top with half of the grated chocolate: 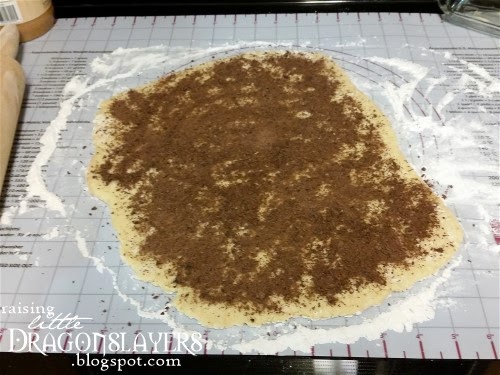 Roll the dough into a cylinder: 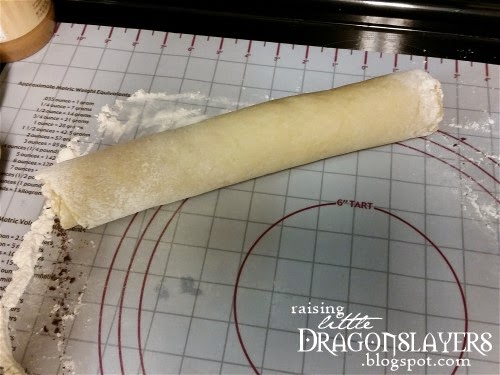 And cuut into four equal sections: 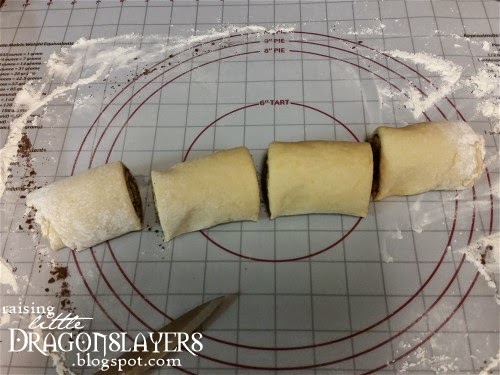 For this next part, I highly recommend that you check out the video with the original recipe, because demonstrating the technique to form the rolls is just more effective than trying to describe it to you...

As demonstrated in the video, take one of the sections and slice it thinly: 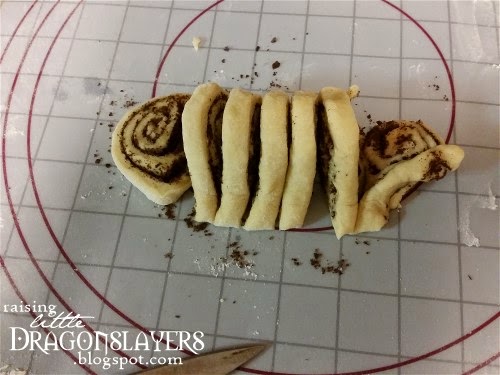 Then pinch it back together: 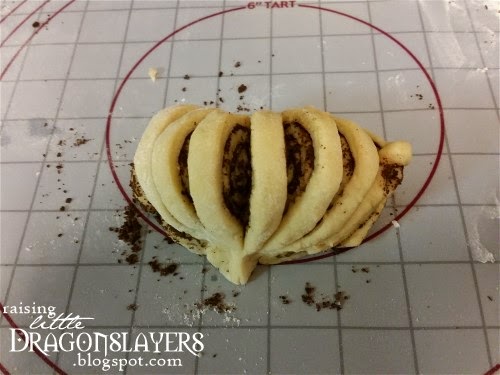 Repeat with each of the four sections; then repeat the whole process of rolling out, topping with chocolate, etc. with the other half of your dough.

Arrange all eight rolls on a parchment-paper-lined baking sheet: 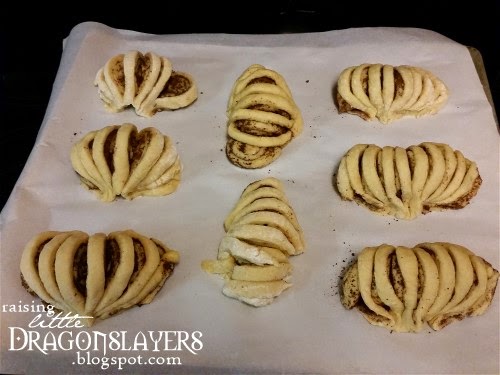 Cover with a clean, slightly damp cloth, and let rise for another half an hour: 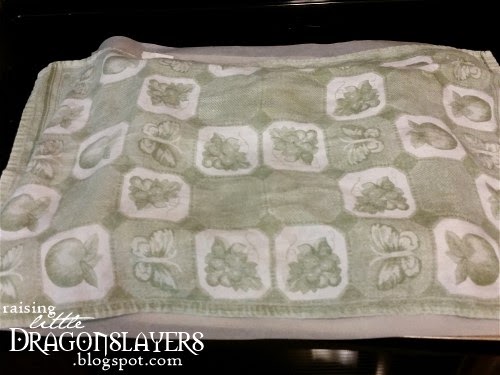 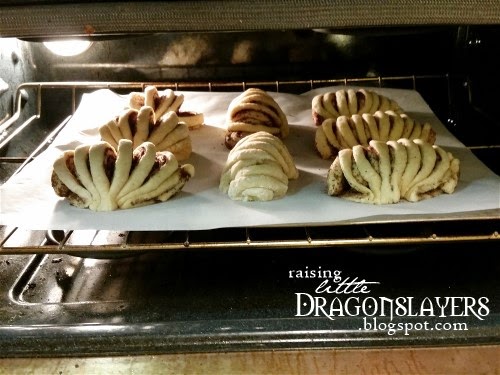 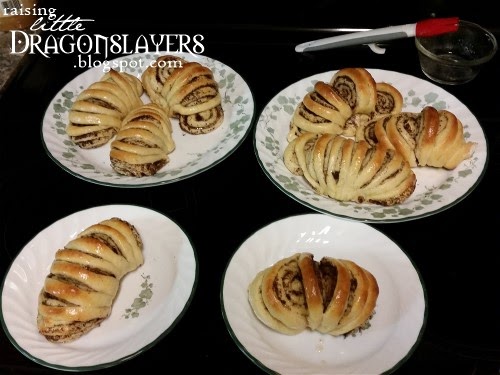 I separated mine out onto plates, because I wanted to try some with just butter, and some with powdered sugar; also, I pulled out the two prettiest because I knew I was going to take that main picture at the top of this post... 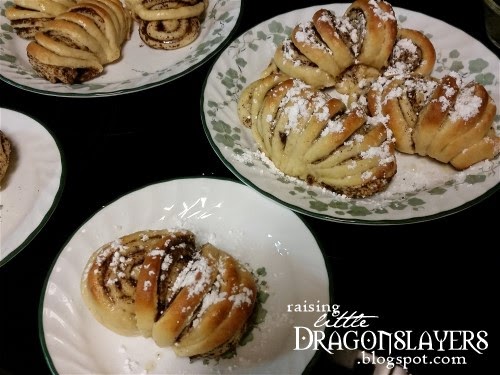 Yeah, I definitely preferred the powdered sugar version.  And there's no such thing as too much butter on these, either! 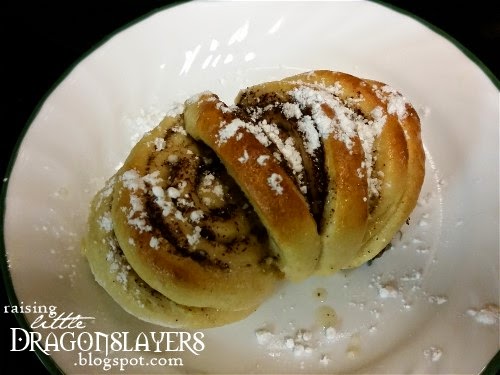 I think the sugary version seems more like District 1, don't you?

Now, one last thing before I wrap up this post...I've decided to include Easter eggs in all the main photos.  So, amid the props representative of the district's industry, each photo will contain at least one prop or reference from a different fandom (other than HG). 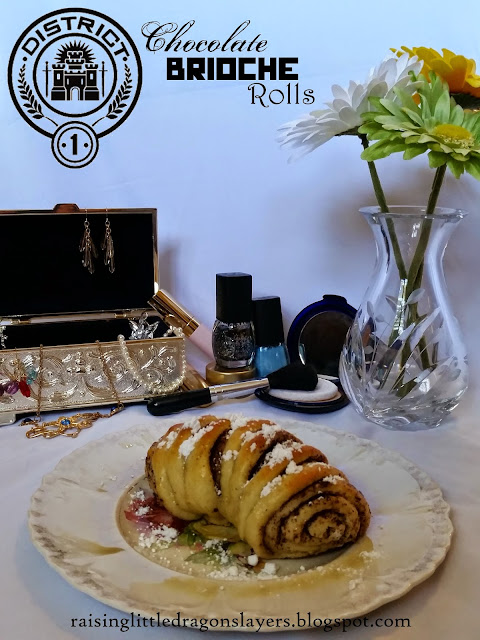 Here's a hint to get you started: this one contains three, from two different fandoms.  Let me know in the comments if you catch them!  I'll reveal 'em in the next post in the series. :-)

May the odds be ever in your favor!