And now, we interrupt our regularly-scheduled DC coverage programming to bring you...

If you caught my post on my daughter's birthday-gift dress-up box, you'll recall that Kaylie had no interest whatsoever in a single princess dress, tutu, or anything girly.  Instead, she proclaimed that she wanted to be a pirate, or a cowgirl.

Pirate still seems to win out most often.  Mostly, though, she just ignores the dress-up stuff entirely....I still can't quite wrap my head around just how completely uninterested my three-year-old daughter is playing dress-up.  Halloween, on the other hand, is another matter entirely....

I love Halloween, mostly because it's the closest I've ever gotten to cosplaying (yes, I still dress up for it...even if it's just to answer the door and hand out candy).  We got Kaylie a cute little pirate dress for her second Halloween, when she was eighteen months old, and she asked to wear it again last year.  This year, though, she's finally outgrown it, so I began the conversation a few weeks ago about what she'd like to dress up as.

I asked her on a few other occasions as well, just to be sure she wasn't going to change her mind.  No, she definitely wants to be a pirate this year.  And she is very adamant on the pants thing--which I'm not fighting her on (boys' costumes will do double-duty once they fit Wil; plus, pants just make more sense in all of life).

I was thinking about making her a costume--I am crafty enough that I've always envisioned making my kids' costumes--but the timing just isn't right this year.  It seemed simpler, and probably cheaper, to just pick up this great pirate outfit we stumbled upon at Costco last week. 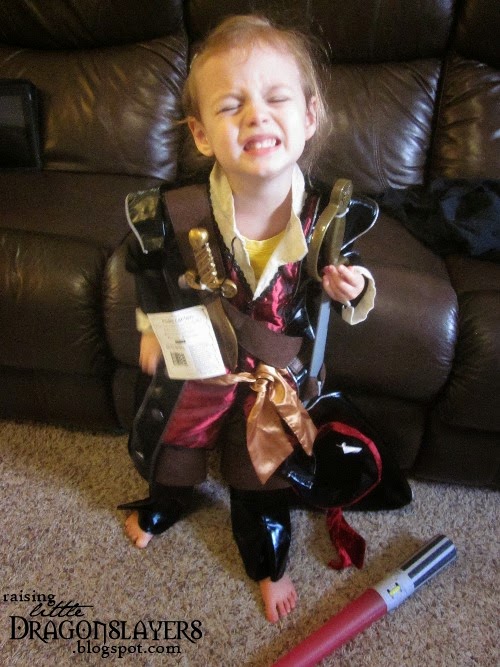 We tried it on this morning.  The smallest size they had was a 3/4, and she's currently in 2T...so it's a little big.  But it doesn't look too terrible--the sword only just touches the ground, and the pants are meant to bunch above the attached boot toppers, and the coat is supposed to be long anyway.  So, we're keeping it.  (And she can wear it again next year, if she doesn't want to break her trend!)


Plus, it comes with an adorable hat, as well as a cutlass AND a dagger! 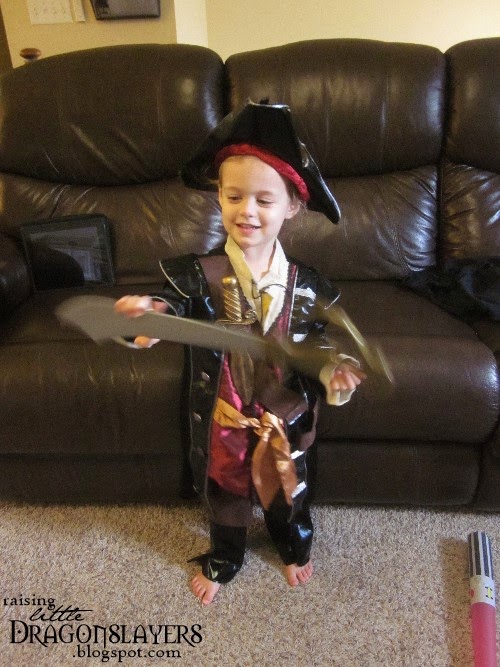 She handed me the cutlass, pulled out the dagger for herself, and begged me to fight with her.  I was happy to oblige!  (She proceeded to chop off my leg.  She's quite fearsome.)

She loves it.  She actually wanted to add it to her dress-up box right away, but I told her we needed to set it aside until Halloween to make sure we don't lose any of the pieces.  Still, I love seeing how excited she is about her costume!  I reminded her that I have a pirate costume, too, so we could be pirates together, and she jumped up and down and asked me where my sword was....I don't think Halloween can come quickly enough for her now!
at September 11, 2014