Home of amusingly belligerent victor-turned-ally Johanna Mason, District 7's primary industry is lumber.  Its bread is yet another left un-discussed by Suzanne Collins in the trilogy, so I chose this delicious pull-apart bread--because herbs are like leaves, which are like trees, right? ;-)


This bread is based on this recipe. 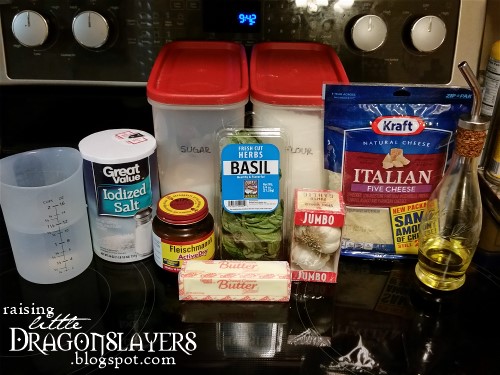 In your mixing bowl, combine the flour, yeast, salt, and sugar: 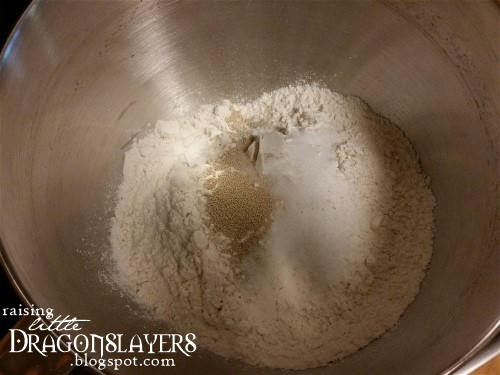 Add half the water; mix.  Slowly add the rest of the water while mixing: 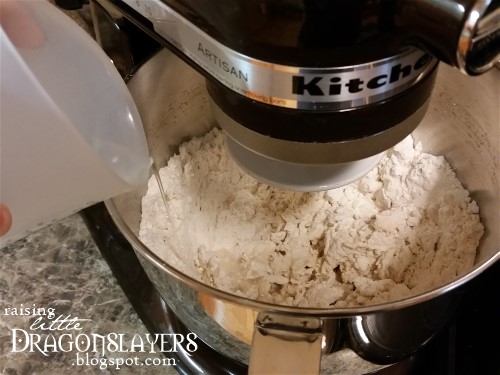 You should end up with a nice ball of dough: 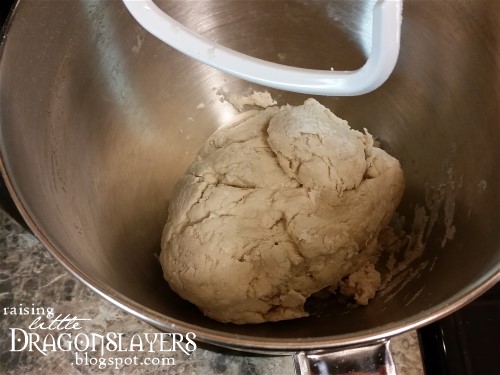 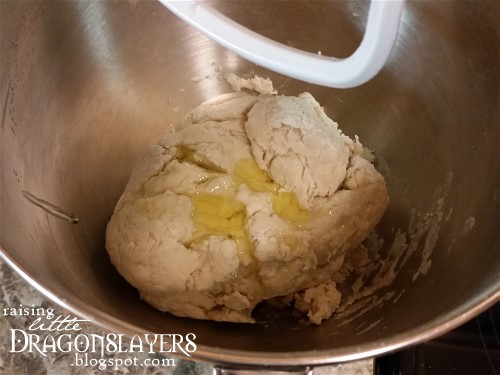 If you're kneading it by hand, you may want to move the dough to a floured surface before adding the olive oil.  Knead, or mix by stand mixer (if you're cheating like me), until the dough is smooth and elastic: 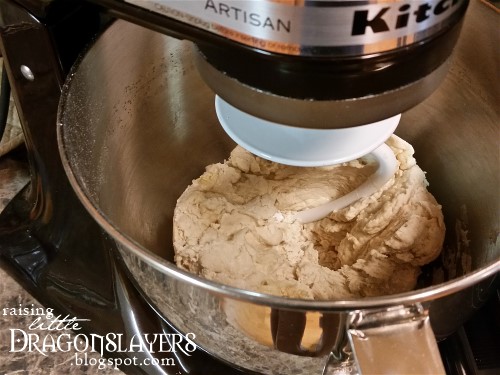 Leave the ball of dough in your bowl: 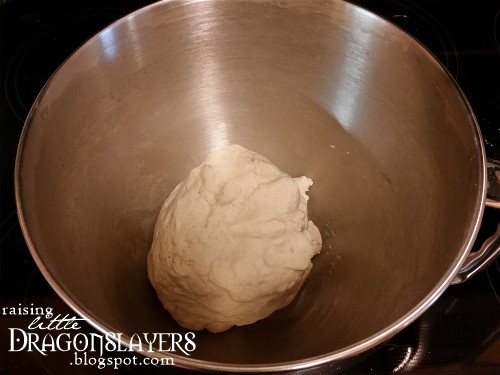 Cover, and let rise about an hour to an hour and a half (until the dough doubles in size): 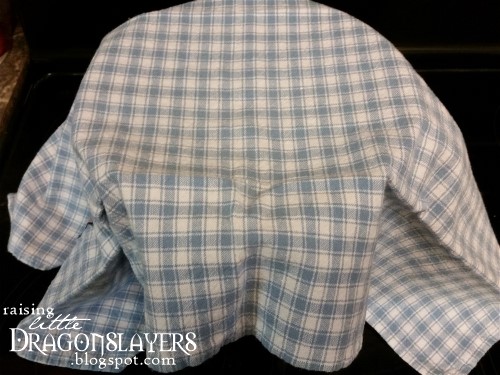 Use that time while you're waiting to prep your mix-ins--chop those herbs and mince that garlic: 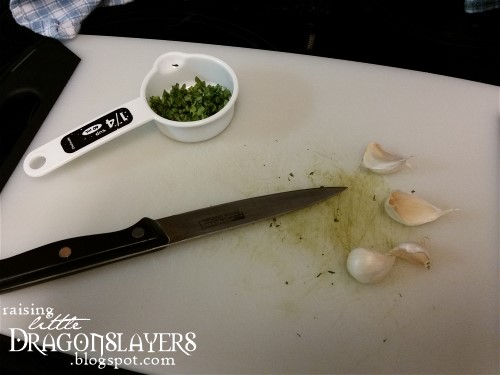 Shred that cheese, too, unless you went the easy route like I did and bought a bag pre-shredded.

So, a word on the herbs: the original recipe called for considerably more herbs than I ended up using.  Due to a variety of unfortunate circumstances that prevented me from buying anything but basil, and then kept me from having time to make the bread until bits of the basil had begun to look, erm, questionable...I ended up with less usable herbs than I would have liked.  I'd recommend using at least a quarter cup, up to a full cup, of the herbs of your choice.  My scant 1/8 cup of basil looks rather sad, and sparse on the finished product.... 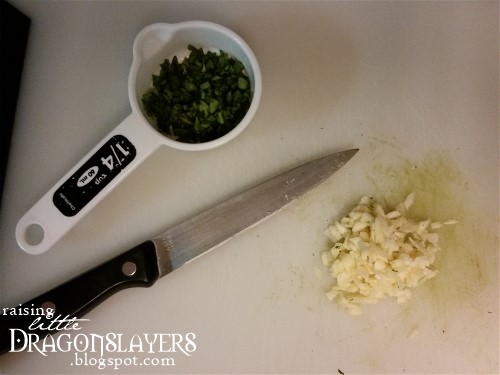 Once the dough has doubled in size: 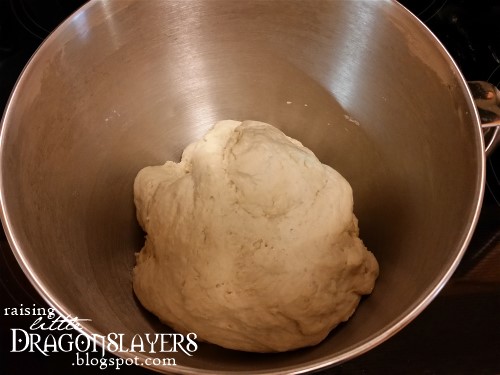 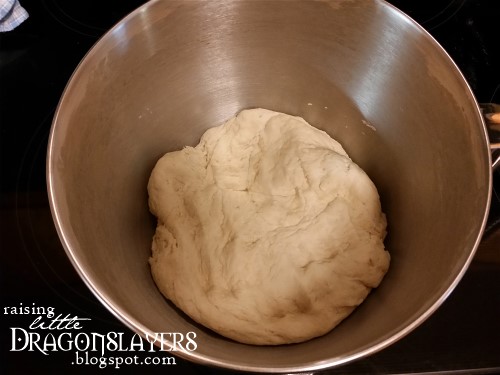 On a flat work surface, roll out the dough in a large rectangle, to about 1/4" thickness: 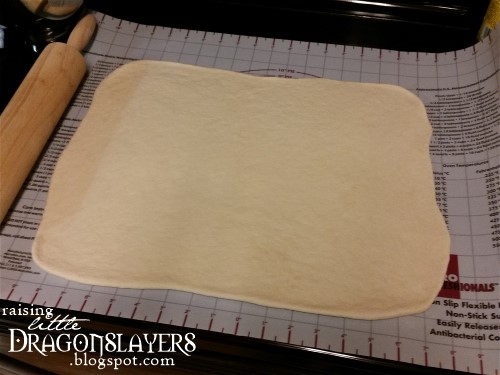 My rectangle ended up being about 14" x 17", to give you an idea of the size.  Since you'll be cutting the dough into squares, you want to try to keep the edges as straight as possible--I found that rolling the edges toward the corners helped to keep a regular shape.

Next, spread the butter evenly over the dough: 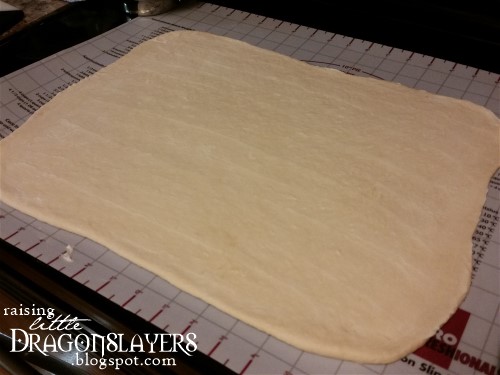 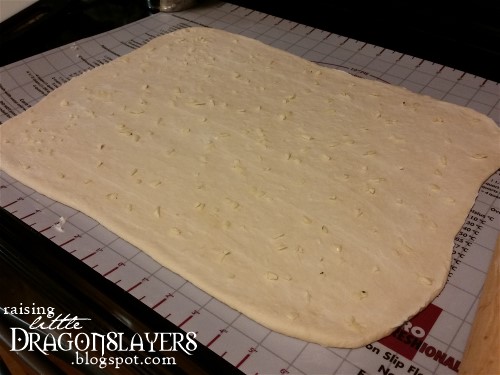 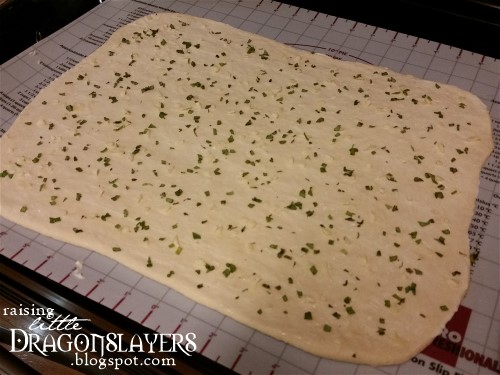 Then add an even layer of cheese, going right up to the edges: 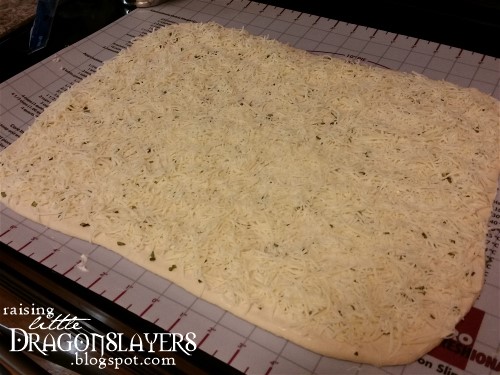 Take a look at the loaf tins you'll be baking in, and slice the dough into squares that approximately match the height and width of your tin: 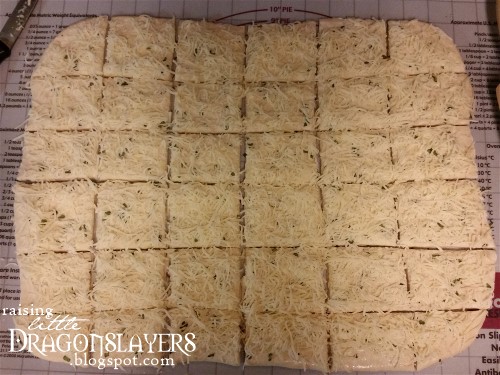 Grease your tins (bottom and sides), then, one at a time, turn it on its end and prop it up by your work surface.  Stack the squares in the tin: 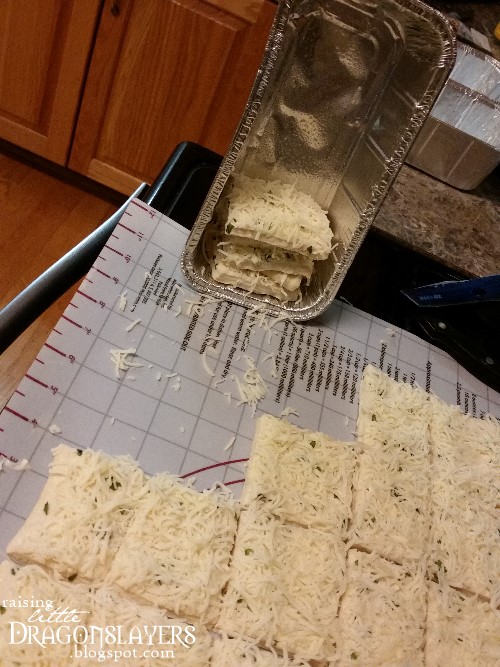 Top with the cheese that inevitably fell off of your squares as you tried to stack them: 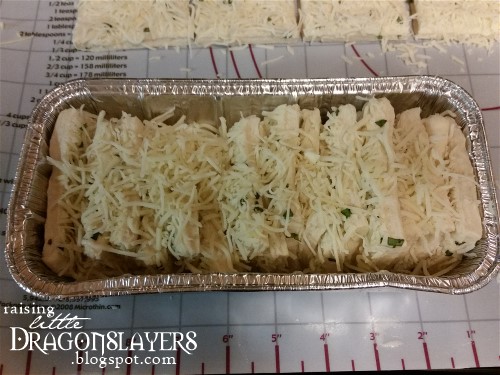 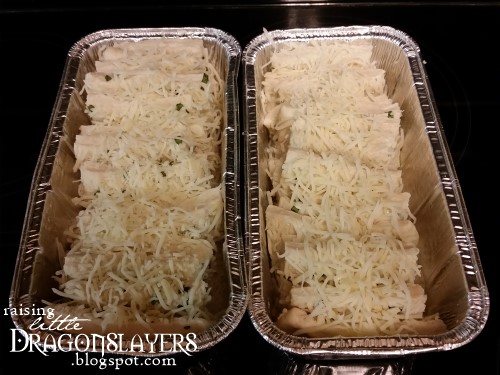 Cover them and let them sit another 30 minutes. 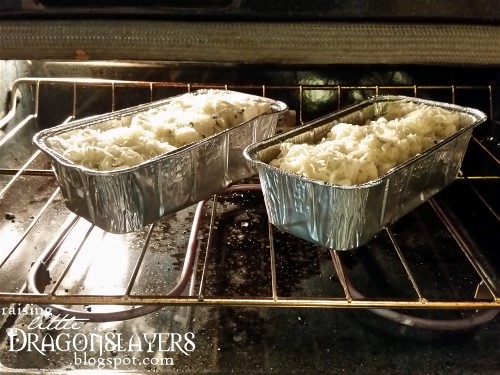 Since I had two loaves, I played with the time a bit--the original recipe called for a 55-minute bake time, but they looked done ("golden brown") long before then, so I took one out at the 42-minute mark and left the other in for the full time:

Both were fully cooked through and unburnt, but I liked the under-baked one better of the two.  I felt like the other one was a bit overcooked.

Let the loaves rest in the tins for another ten minutes, then remove to serve warm:

Some of the pieces "pull apart" more easily than others, but each bite has the same garlicky, cheesy, slightly-basil-ly (use more than I did!) goodness: 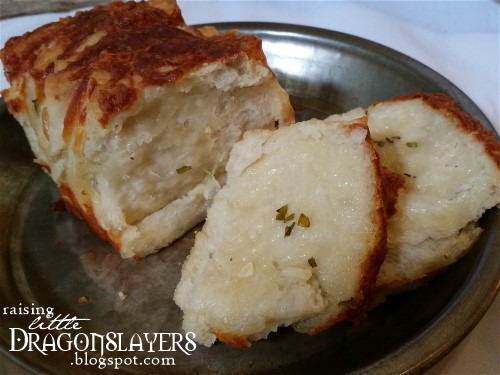 But don't just take my word for it: 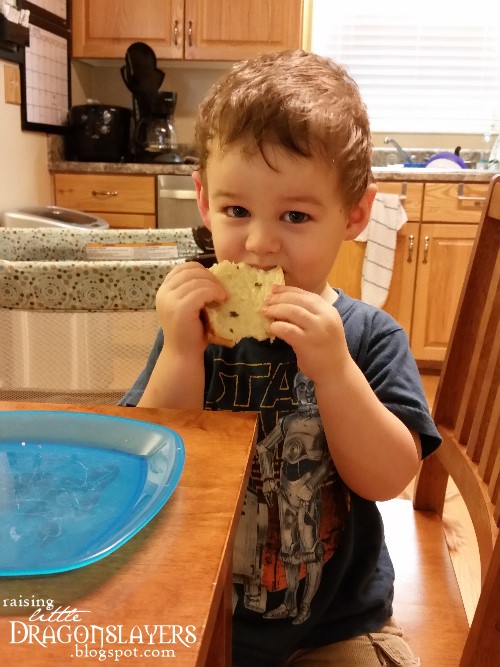 This one was definitely Wil-approved. :-) 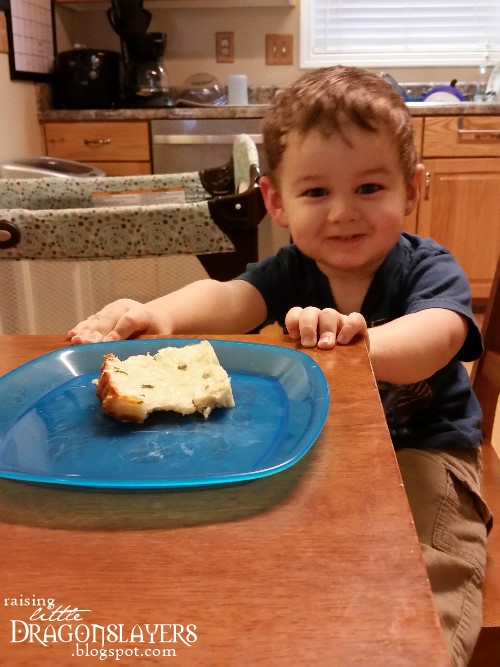 For your cut-and-paste convenience:

Can you find this week's Easter eggs (references to other fandoms) in the main photo? 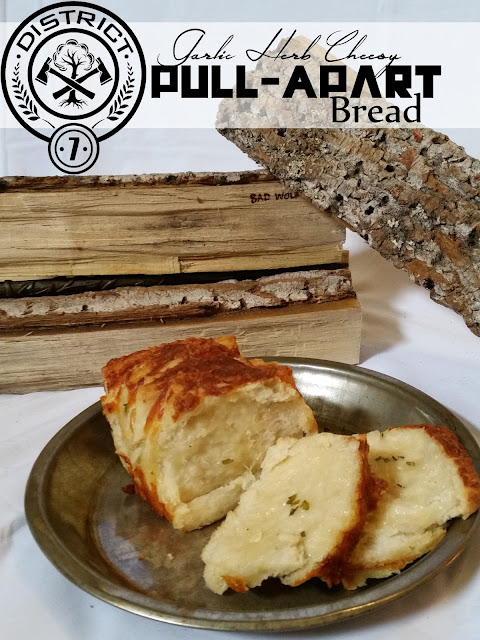 There are two this week!  Let me know in the comments if you've caught them. :-)

Ready for the reveal from last week? 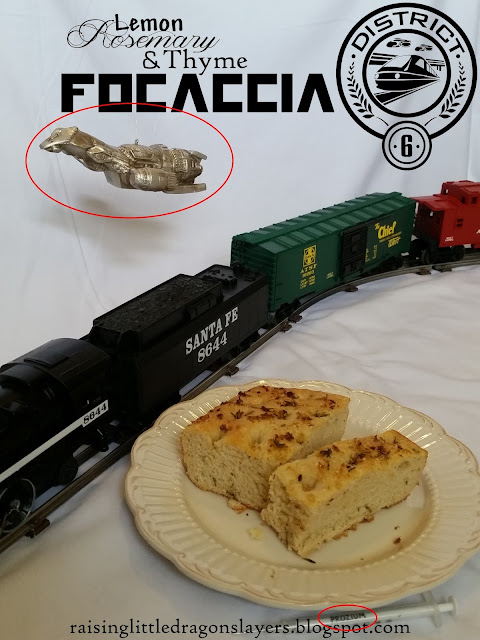 If you're a Browncoat, the first one was easy--the "hovercraft" was actually Serenity from Joss Whedon's "Firefly" (in fact, the staging was specifically a reference to the second episode, "Train Job").  The second was a little harder to spot--the syringe at the bottom of the photo is labelled "Prozium", which was the name of the emotion-suppressing drug used in the film Equilibrium (underrated sci-fi film starring Christian Bale, which happens to have one of my two all-time favorite fight sequences--the other is River in the bar in Serenity).  I figured morphlings (District 6 is known for widespread morphling addiction) would be just as likely to reuse needles as drug addicts in our current world. :-/

Let me know in the comments if you catch the Easter eggs this week, or if you try this District 7 bread!  As always, may the odds be ever in your favor! :-)