I've been itching to dig out my sewing machine (we moved a few months ago, and are still unpacking) for a while now. I had an excuse the other day--to make a baby gift--and once it was out, well, I didn't want to give it up. It's still in the corner of our living room, and it's gotten continued use the past few nights once the kids were in bed.


Made of knit on one side, flannel on the other, with ribbons for his tail spike and dermal plates.


My favorite element is the patterned knit......


The background is a quote from "Firefly," from Hoban "Wash" Washburne's introductory scene (for whom "Hobie" is named).


(Hobie was made from this fabric, using a pattern from this tutorial.)

I was very excited to give little Hobie to my seven-month-old, Wil.


He was fairly indifferent. After all, our living room floor was covered in Duplo pieces at the time, which were apparently much more interesting.

My two-and-a-half-year-old, however, was intrigued. Every time I handed Hobie to Wil, Kaylie would sit down less than a foot from him and wait restlessly for him to put the dinosaur down, at which point she would snatch the toy up and proclaim, "Baby Wil's all done with Hobie! Kaylie can play with him now!"


I really meant for it to be a baby toy. I mean, look at it. It has no face, it's made from two different fabrics, it has ribbon tags.....the seven-month-old should like it more than the two-and-a-half-year-old. But Kaylie seemed so excited about it and so eager to play with it that I asked her if she would like her own dinosaur, too. Oh, the look on her face....I love that look of unadulterated excitement that kids can get. So Evi became naptime's (and some of the rest of the afternoon's) project.


Evi ("inEVItable betrayal") is satin on one side and minky on the other, made from scraps left over from the aforementioned baby-gift project. Her ribbons are a bit more crooked, because I really wanted to finish before Kaylie got up from her nap (I didn't quite make it, but Kaylie enjoyed watching the last few steps of the process before she got to play with her).


Well, at least they were a hit with one kid. And I think they're pretty cute, too. :-) 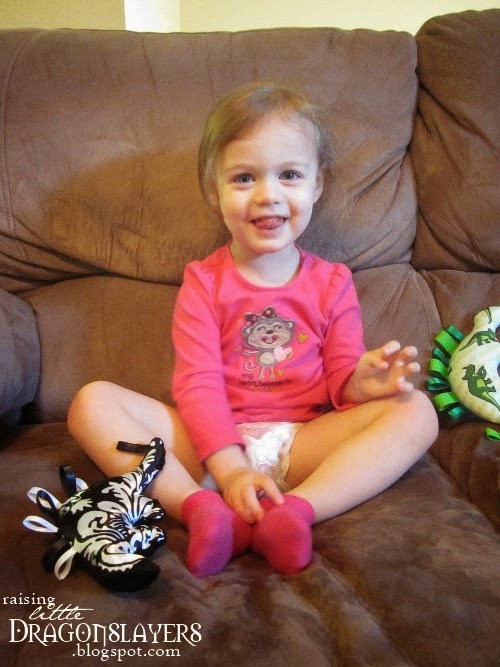