So, what is "Raising Little Dragonslayers" about?

Write what you know, right?  So I'll be writing mostly about the things that have the majority of my time, attention, and interest: parenting my two kids, general geekery, and the relationship between the two.

Momming is a 24/7 gig.  Literally.  My six-month-old has a cold and was miserable last night, so I didn't get to go to bed until my husband relieved me just before 3 am (they both finally made it to bed half an hour later), and he (baby, not husband) woke up crying and congested at 7:15.  Fortunately, my two-and-a-half-year-old slept through the night for once; lately she's been prone to waking up crying multiple times a night, usually sobbing about pooping in her diaper and insisting she needs a diaper change (she never poops in her sleep--I think she has dreams about pooping in her diaper, and, being only two, can't differentiate between dreams and reality upon waking in the middle of the night).  I spend in the ballpark of ninety percent of my time taking care of my kids: feeding them, changing them, chasing them, washing them, playing with them....it is my life.  It's exhausting and frustrating and wonderful.

Being a mom is my identity right now.  My kids are young, so they need a lot from me, which doesn't leave a lot of time and energy for very much else.  So I anticipate sharing stories of my kids--their funniest and most frustrating moments--on this blog (because what the kids did today is often all I did today, too), along with thoughts on and experiences of parenting in general.

Part of being a stay-at-home mom is also running the house: keeping up with laundry, dishes, cleaning, cooking.  Ha!  These days, I just try to keep up enough to keep things from growing where they shouldn't.  (And that's okay.)  I look forward to sharing thoughts on what works in our house and tips and ideas that have made my life easier, including favorite go-to dinner recipes and crafty organizational projects.

I suppose technically I'm more "nerd" than "geek", since I prefer books to technology and I'm atrocious at video gaming, but I use the term "geek" broadly to communicate that I am a person that enjoys passionately pursuing, to whatever degree I desire and/or am able, things I find exciting, regardless of the interest level of those around me.  What kind of geek am I?  I am at home with a book in my hands, especially of the epic fantasy or young adult dystopian varieties; David Tennant is "my" Doctor; I adore everything Joss Whedon has touched (particularly "Firefly" and "Dollhouse"); my sewing machine sees more use sewing costumes than anything practical; I collect swords, knives, and guns; I am a tabletop gaming enthusiast.  If it has to do with Lord of the Rings, "Buffy", "Sherlock", Narnia, pirates, modern "Doctor Who", original Star Wars trilogy, horses, linguistics, Felicia Day, or Harry Potter, I'm in.  I'm always open to checking out new things, and I'm usually a little late to the game since I don't watch live TV and I merely dabble in social media.  These interests inform who I am, and, right now, how I parent.  The things I love are a part of me.  So I'll be writing about them.

I'm twenty-seven, and I still don't feel like a grown-up.  Is that weird?  I'm older than the characters on "Friends" were when the show started....bizarre.  I still can't wrap my head around it.  When I was a kid, "grown-up" seemed like such an obvious stage of life or state of being, but I didn't feel grown-up when I graduated high school, graduated college, had my first alcoholic beverage, got engaged, got married...or had two kids.  I think that's partly because of the nerd-slash-geek that I am: I think "growing up" carries connotations, in my mind, of getting boring.  Of abandoning the pursuits I loved as a child.  Of living only for grown-up responsibilities.  And I suppose that's true, to some extent: I have had to sacrifice many of my pursuits as I've grown into more responsibilities.  But I still love the things I love, and love them passionately, and I still get uber excited about things that don't seem very "grown-up" to me.  Like Lord of the Rings LEGO....those two sets were two of my favorite Christmas presents last year.  I think I'm beginning to learn that my idea of what it was to be a grown-up wasn't very accurate; either that, or geeks just make for more interesting grown-ups. :-)  So on this blog, I'm going to be honest about what I'm excited about, even if I think I'm coming across as childishly giddy over something some might find silly.  Because that's who I am.

So, that's me: I'm a geeky mom.  I want to raise my kids to passionately pursue what they want.  I want them to be unafraid to love what they love; I want them to have the courage to speak up about and fight for what matters to them.  I hope they like some of the things I like, but if they don't, I want to be the mom who cheers them on in whatever they love.  I want them to live adventures of their own, and slay their own dragons.  And I'm gonna write about it. 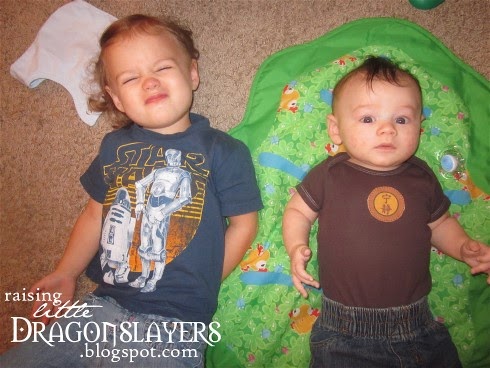