I asked her a few days ago what she'd like to eat on her birthday. She immediately replied that she wanted cupcakes, monkey bread, and veggie pasta.


So we started the day with monkey bread!


Once Wil went down for his morning nap, Kaylie helped me make cupcakes. (Kaylie loves to help me stir the batter, and place the liners in the cupcake trays. Such a good helper!)


While the cupcakes baked, we played a rousing round of "fifty-card-two pick-up" (with Kaylie's three decks of cards), which was followed by helping her dinosaurs play hide-and-seek.


The tyrannosaurus rex has been named "Rex" since she got it, I think because of Toy Story. The previously-unnamed stegosaurus was christened "Cupcake" (gee, I wonder why?). Cupcake would hide under all of the cards, and Rex would come to find him.

Lunch was, at her request, ABC Spaghetti-Os with meatballs. And dinner was her favorite--veggie pasta with Parmesan (along with green beans with almonds--I gave her a few choices for a vegetable to go with dinner). And after dinner, we all headed outside for her biggest present of the day:


We gave her a dress-up box a week and a half ago, so we could celebrate early while her grandma was visiting, but this was her other "big" present this year. She's been talking about tricycles for months, and she sings a song about riding a tricycle that she learned from Elmo on "Sesame Street" all the time, so Casey and I were super pumped to get this for her.


I waited outside with Wil and the tricycle, juggling both cameras so we'd get pictures and video of the moment. Of course, the first thing she said as she came out the door was "Why does Mommy have a camera?" It took her a few more seconds to notice the tricycle!


Her reactions are always subdued. She's not one for exclamations or jumping for excitement (though she loves jumping for its own sake).


With her, you see it in the eyes. They just light up as it sinks in. It's like we have to tell her something good a few times before she believes it, and then she starts smiling. 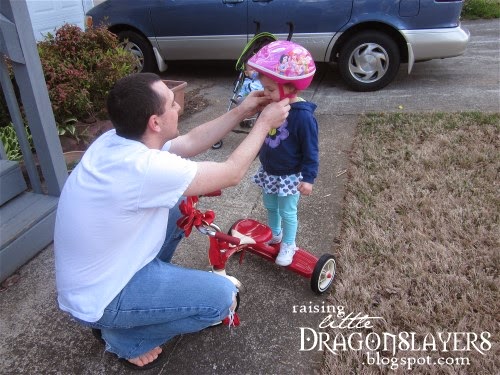 By the time we strapped on her helmet, she'd begun smiling and repeating, "It's a tricycle for Kaylie!" 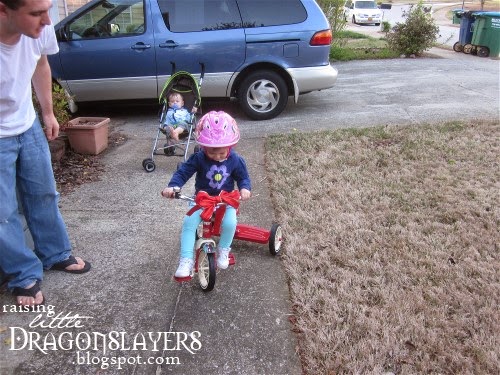 I think she started singing Elmo's "Riding a tricycle, all the day long" as soon as her bottom hit the seat.... 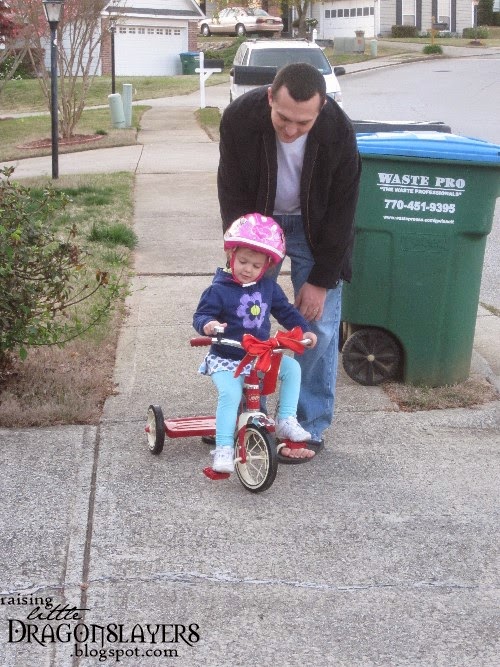 We didn't make it very far--just to the end of our driveway. She loved the little bell on the handlebars! 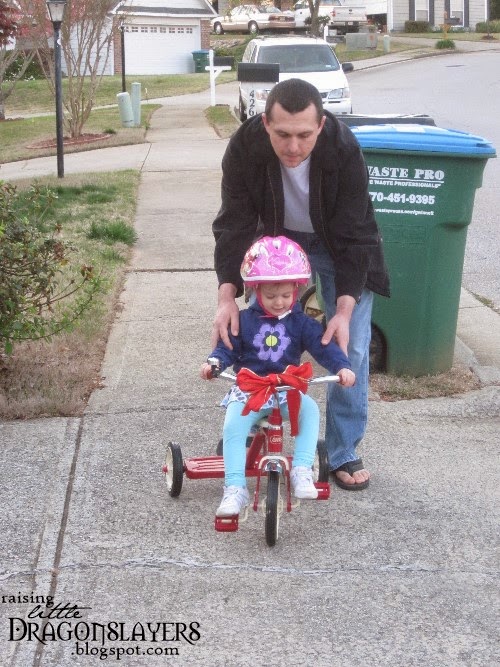 Wed tried to get her to start pedaling on her own, but she kept getting off to stare at and admire her new tricycle, so she didn't make much progress there. But that's okay; it's hers now, so we'll have plenty of time to practice! 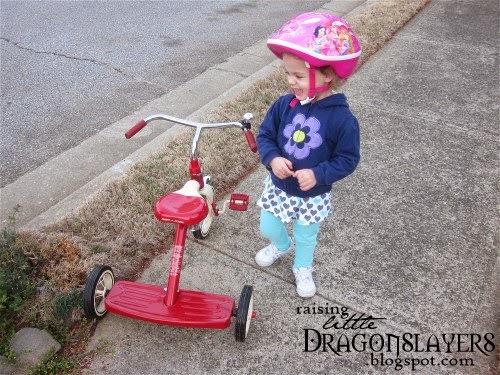