Dinosaur Meat (or, Corned Beef and Cabbage with Potatoes).

The year my husband and I got engaged, we flew to California to spend Christmas vacation with his immediate and extended family. It was the first time he'd brought me home, and I got lots of stories from his childhood. One of my favorites was that when he was young, he believed for years (the first time my mother-in-law told the story, I think it was until he was ten; he gets older every time she tells it! ;-) ) that this particular meal was made of actual dinosaur meat. (He defends his younger self by reasoning that he'd heard of mammoths and such being found relatively intact, preserved in ice. Why not dinosaurs, too? And why wouldn't they sell the meat to grocery stores? Why would parents lie about such a thing? Aw, he was so trusting.)

So, we call this meal "Dinosaur Meat" in our house. (It's actually corned beef and cabbage with potatoes.)


We make it every year for St. Patrick's Day, and a couple other times just for fun. It's an easy crockpot meal, and it smells soooo gooooood.

Seriously. Half the time, I make it just so I can smell it cooking all day. I don't actually like corned beef (super picky eater here; I make this one for the hubby), but I love the way it smells. So. Good.

And, of course, you'll need a crockpot. And I like to use these slow cooker liners to cut down on clean-up, but--fair warning--they end up leaking once every three or four times I use them. Like this time. Which is why the first half of the pictures show a liner, and the second half don't (it leaked so badly this time that I just pulled the liner out from under the cooking meat). But they do help the other sixty-six to seventy-five percent of the time....


Begin arranging potatoes in the crockpot.

Of course you can just dump the meat and potatoes in the crockpot any which way, but I prefer to fit as much in there as is physically possible. I always arrange a ring of potatoes around the bottom before I put the meat in.


Add the meat. (See how nicely those potatoes cradle the meat? No wasted space!)


Add the rest of the potatoes.


This is the packet of seasoning included with store-bought corned beef. This is what makes it smell so heavenly.


Sprinkle the seasoning over the meat and potatoes.


Add enough water to fully cover the meat and potatoes.


Cook it on high for 6-8 hours. You'll want to flip the meat over every once in a while, but otherwise, just sit back and enjoy that wonderful smell wafting through your house. (I don't even know what it is in that packet that makes it smell so good....it just does.....mmmmmm......)


...wash and cut your cabbage to add. I like to cut it into eight chunks; it fits better into the crockpot that way, and the pieces are more manageable.


Add the cabbage to the crockpot. Add more water as necessary.


I check it every so often to make sure it's all mostly submerged, and stir it around a bit to cook more evenly.


The potatoes and cabbage will be nice and soft by the time it's done, and the meat should be fairly easy to pull apart.


I make my husband handle the corned beef, because I don't like meat. He fishes it out of the crockpot and uses forks to shred it in a bowl or in the container we'll put the leftovers in. 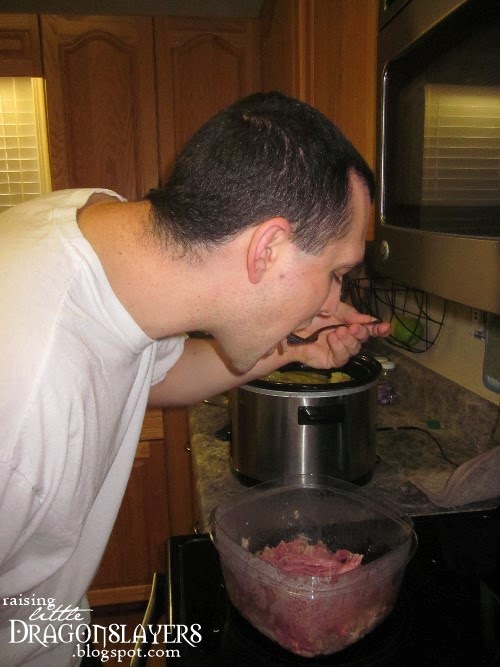 ...and he samples it repeatedly, until I forcibly pry the forks from his fingers and push him away from the counter so I can take another picture before dishing our servings.


He claims that the larger grain of the meat was one of the reasons he believed his parents about it being dinosaur meat. Curse your sudden but inevitable betrayal!


We told Kaylie, our three-year-old, we were pretending it was dinosaur meat, and then somehow the cabbage got renamed "alien brains", too, so now this meal is just really weird. (Any suggestions on what we should call the potatoes?)


For your cut-and-paste convenience:

Corned Beef and Cabbage with Potatoes