I'm not very fashion-conscious.  For the most part, I don't really notice what other people wear, or what looks are "in".  My wardrobe consists almost entirely of jeans and geeky t-shirts, and I'm good with that.  But every once in a while, I'll see someone in something and think, "I wonder if I could pull that off..."  For this week's "5 Fandom Friday", here are five characters with looks I'd like to pull off:

Michonne is my kind of badass.  I'd like to think that if I found myself alone in the midst of a zombie apocolypse, I'd pick up a sword and learn how to survive with it.  I think I'd probably go for a look much like hers, too--largely practical, but with a flair for the dramatic (can you get any more dramatic than her first appearance in the season two finale?) 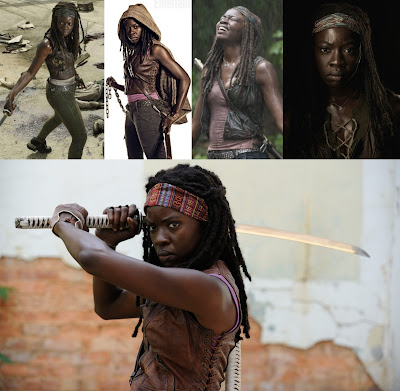 I love the leather and the laces--I would wear things that lace like that all the time if I thought I could pull off that look (I totally want her brown leather side-laced vest, in particular).  Permanently add a samurai sword to the look?  Perfect.  Though I'd more likely go for a claymore or a cutlass myself, since that's what I happen to have on hand...

For a while, I wondered how she'd come into the wardrobe I so often found myself admiring--were those her clothes from before, or had she somehow accumulated numerous pieces that fit her badass warrior look?  Then we see her in season five with her new sheriff's uniform: 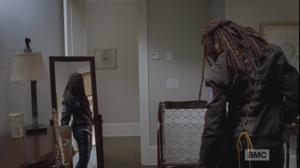 Clearly, she's been altering what she finds to fit her tastes, if it doesn't to start with.  Which only makes her more awesome in my book.  I mean, it's the zombie apocalypse; why not go for whatever look you want? I kind of want to be Fi when I grow up.  In some ways, she's basically me if I had no inhibitions.  Her solution to most problems is to shoot someone or blow something up (I often wish that were an option), she's an illegal arms dealer (just think of all that weaponry she gets to play with!), and she's very vocal about her opinions (I'm pretty opinionated once I know you well enough that I know I won't hurt your feelings).  Though if I ever tried to model my wardrobe after hers, I'd be wearing bikinis far less and bras far more (inhibitions!)....But she rocks every look she goes for, from bikini to evening gown, sundress to jeans and a tee--all paired, of course, with killer heels and a gun or two. 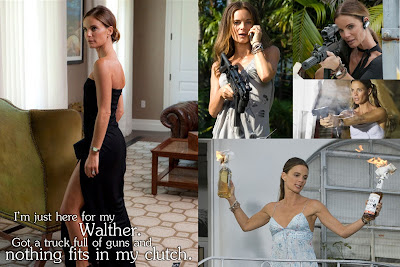 But my favorite piece of her attire is definitely her hip bag: 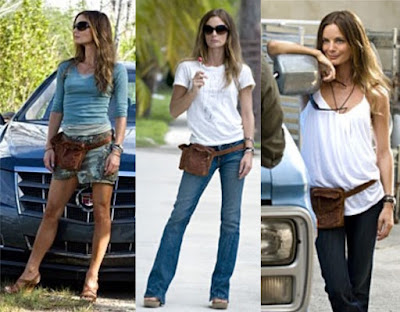 Hands-free is really the way to go if you never know when you'll need your hands to draw a gun or throw together a bomb, and keeping your bag close to the body keeps it out of the way should you need to make a quick exit out a window, making the hip bag idea altogether very practical.  Personally, I consider hands-free to be a necessity (I have two hands and two kids--I can't afford to give up a hand to keep adjusting a purse!), so I exclusively use cross-body purses (like the ones I made), but I'd consider branching out to a hip bag like Fi's if I ever found the right one.

Because who wouldn't want to wear yoga pants and a tank top all day?


Sign me up.  Just...maybe don't sign me up for all the other stuff that goes with being an Active...


Mostly, I love the idea of starting out like this:

And having someone else tell me how to end up like this:


Because, really, there are some of us that just plain need a Victor Melling (Michael Caine) to take over, and tell us how to do the clothes and the hair and the makeup.  We're just not going to get there on our own.


But even with a Victor Melling at my side, I think I'd still end up pulling one of these:

If I could be dress as any character, it would definitely be Eowyn, shield-maiden of Rohan.  I love everything about the Rohirrim--the horses, the culture, the art, the clothes, all of it.  If I could move to Middle-Earth, there's no doubt I would belong in the Riddermark.

Eowyn happens to be my favorite character in all of literature.  While she's great in the films, she's even better in the books, and when I first read the trilogy as an awkward teenager who felt out of place in my love-bordering-on-obsession for horses and swords, I connected with her character--first because she was good at the things I was interested in, but then because I could relate to her longing for a place in the world where she could be herself, and make a difference in the world by doing so.

But this post is about fashion.  Let's just say that there isn't a single thing that Eowyn wears in the films that I wouldn't love to come into style:

The sleeves!  I am a complete sucker for flowy sleeves.  Most of the shirts that I have bought in my life that weren't t-shirts, I bought because they had interesting sleeves (usually loose and flowing).  But I really love Eowyn's whole look, and if I could find a way to bring it "in", I would slay the Nazgul to make that happen.

*I didn't even realize this until I'd finalized my five picks, but there's one thing they ALL have in common: they're all armed (with the possible exception of Echo, that is--but she's often armed in her Active state, and later on as Echo herself reaches self actualization).  So, um, I guess my favorite accessories are guns and swords?  Sounds about right.*

So who are your favorite fictional fashion icons?
at June 19, 2015