My take on "Jurassic World".


SPOILERS AHEAD.  You've been warned.

Like everyone else who grew up on Jurassic Park and its sequels, I rushed to the theater (a few days late...life with kids) to see the latest installment in the Jurassic world.


Jurassic Park was the first movie I ever bought for myself.  I still remember buying the VHS with my own money--I must have been eight or nine years old at the time.  I don't remember how old I was when I first picked up a copy of the book at a local Goodwill, but I do remember that the entire middle school era of my life was defined by reading and rereading, watching and rewatching, Jurassic Park and The Lost World.  I knew every dinosaur featured in the series, from the little compies (Procompsognathus Triassicus, I do believe) to the gigantic T-rex to the sly Carnotaurus.  The Jurassic world was my world.


Though I read both books multiple times during those years, it's been at least a decade since I've picked them up, and to be honest, all I remember about The Lost World is that the movie was not much like the book and the Carnotaurus was freaking awesome because it could camouflage like a chameleon.  I was always disappointed that neither movie sequel ever had a dinosaur as interesting as the Carnotaurus of the second book.

I was excited to see the first trailer for Jurassic World.  It meant the continuation of a world I've loved most of my life, whether or not the movie turned out to be any good.  Then came the next trailer, and holy crap is he hunting WITH RAPTORS?!?  Hope grew, and I literally cannot remember the last time I was this excited about an upcoming movie (in fact, the closest excitement level I've reached in recent years was for the theatrical 3-D release of Jurassic Park).

Fortunately, it lived up to every expectation--and more than that, to every high hope I had that it would redeem some of what the previous sequels had crapped on.

There's a moment early on in Jurassic World, when the two boys, Zach and Gray, reach Isla Nublar and are settling into their room in the resort.  Gray swings open the balcony doors, and we're treated to a sweeping view of the new park as we hear John Williams' familiar Jurassic Park theme begin to play.  As the music swells and we seem to soar over the island, let me tell you: it felt like coming home.

It doesn't take long before we're introduced to the new dinosaur, the genetically engineered Indominus Rex, though we don't get a good look at her until later.  But in that first conversation at her enclosure, Masrani, trying to catch a glimpse of her through the trees, asks Claire (Bryce Dallas Howard) "Is it white?", and right then, I had my first inkling that this could be it--THIS could be the time they finally make my chameleon dinosaur.  That's confirmed a little later, when Indominus comes out of seemingly nowhere to take out most of the SWAT-like "asset containment team", and the first casualty shouts "It can camouflage!" just before he's snapped up by those giant jaws.  FINALLY.  But the writers have stepped it up a notch, and as the movie progresses, Indominus continues to impress with a growing list of genetic traits that make it the most formidable dinosaur we've ever seen.

But the raptors--more specifically, their relationship with Owen (Chris Pratt)--are, in my opinion, the most interesting element of this movie.  I grew up on the notion that raptors are far to intelligent to be worth the risk of letting them live (Muldoon--"Clever girl"--seemed to be the only character in the original movie who fully grasped the danger they posed).  I was excited, but apprehensive, at the idea of some sort of raptor whisperer, afraid that they'd illogically tamed these terrifyingly intelligent beasts and made them less of what they were.  But I was impressed by the believability of Owen's relationship with the raptors--he knew just how tenuous it was, and never lost sight of the reality that his raptors were dangerous, instinctual animals.  Using them, and his bond with them, to hunt the Indominus becomes a necessary risk, but Owen's trust in the raptors is well-tempered by a firm grasp on the precariousness of his position as the pack's alpha.


I was also nervous to see how Claire would be portrayed in the movie--the trailer made her out to be an uptight control freak in impractical heels who would be little more than the subject of Owen's innuendos.  Jurassic Park featured strong, intelligent, useful female characters in Ellie and Lex--both had their moments to save the day in the original movie.  But while I started off disliking Claire's corporate pragmatism and poor taste in shoes, she turns out to be surprisingly badass, slamming a raptor into a tree with her getaway vehicle (and NOT crashing when one smashed its head through the driver's-side window and practically onto her lap--thank you, writers, for letting a woman be a competent driver for once), knocking a pterosaur off of Owen and shooting it like it's not her first time handling a gun, and she's the one with the brilliant idea to unleash the T-rex on Indominus--and the one to draw it out to the fight.  In the end, she's just as vital to the group's survival as Owen is, and I don't mind that she saves the day without ever kicking her heels off.

But what makes me really love this movie is the little moments that bring me back to the Jurassic world of my childhood: a glimpse of Mr. DNA (voiced by director Colin Trevorrow this time) talking "dino DNA!", Lowery's vintage "Jurassic Park" t-shirt, Zach brushing his hand along the painted raptors on the wall of the old park building, views of the familiar electric fence and the island approach by helicopter, shots of various dinosaurs in rearview mirrors throughout the movie, and the eerily similar way Indominus stalks its prey like the raptors did in the first movie.  Dr. Henry Wu (B.D. Wong) is the only returning member of the original cast, engineering dinosaurs by the nestful, as usual.  Even the very plot--that man, ever over-confident, has, once again, "made" an all-too-dangerous monster that gets on the loose and is going to kill everyone--is a modern take on the original storyline, but with enough new elements that it feels consistent with the original without being guilty of rehashing it.  (The movie also brought to mind other fandoms I've come to love, as well--Lowery's herd of toy dinosaurs on his console are reminiscent of Wash's similar arrangement in "Firefly", and the saddled triceratops are so very Dinotopian.)  But the most evocative moments for me were in the end, when the raptors herd our band of survivors out into the open and corral them on all sides, exactly as they did with Grant, Ellie, and the kids; when Claire uses a flare to draw out the T-rex, just like Malcolm drew the T-rex away from the kids in Jurassic Park; and the final showdown between the biggest baddies of the park--last time it was a T-rex and a pair of raptors who faced off, this time the T-rex and "Blue" team up to take on Indominus.  And that fight was epic--it had me quite literally on the edge of my seat for the last ten minutes of the movie.  That whole sequence stirred so many memories and brought all the tension, anxiety, and excitement that I'd felt the first time watching Jurassic Park flooding back, but managed to top beautifully it with new twists and amazing CG.

I left Jurassic World as excited about it as when I entered the theater.  It was an all-around fun movie on its own, but also a fantastic homage to the original.  Jurassic World brought back my Jurassic world, and it did it excellently. 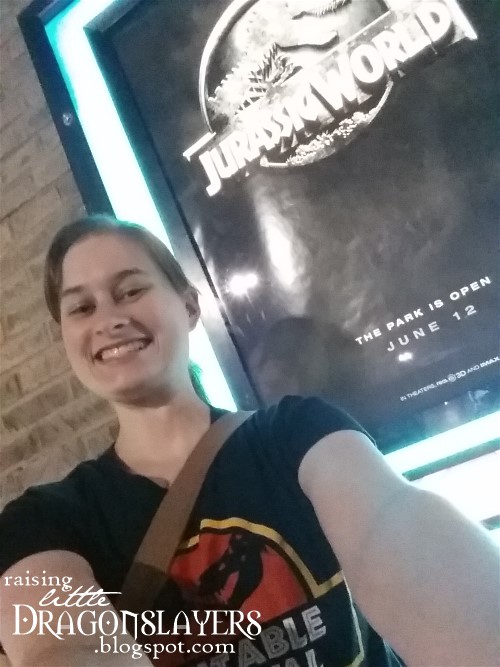 (There's just one question left: What does InGen intend to do with the embryos Wu escaped the island with?)
at June 17, 2015