The final district under the Capitol's rule, District 12's primary industry is coal mining.  As the home of Katniss, it's the district we get to know best in the books.  Extremely impoverished, most of the district's residents claim "tesserae", a year's worth of grain and oil per person in exchange for additional entries into the annual reaping for the Games.  Katniss describes the District 12 bread as "ugly drop biscuits" made from the tessera ration grain.


I made changes to this recipe. 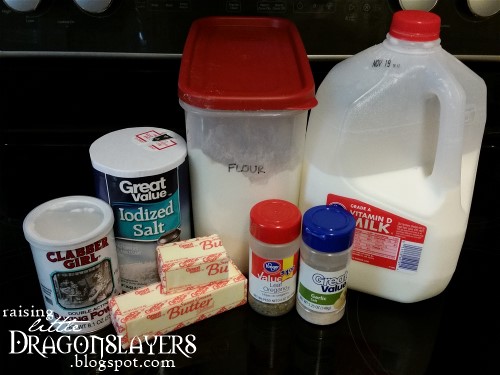 Preheat your oven to 400*F.  In a large bowl, combine the flour, baking powder, salt, milk, and stick of melted butter: 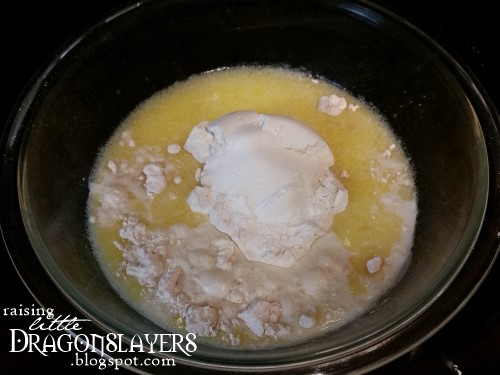 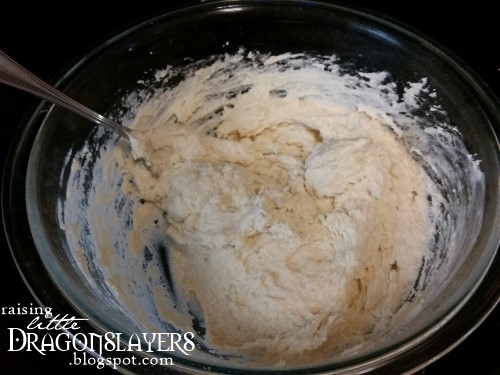 Grease a baking sheet with butter (or with cooking spray): 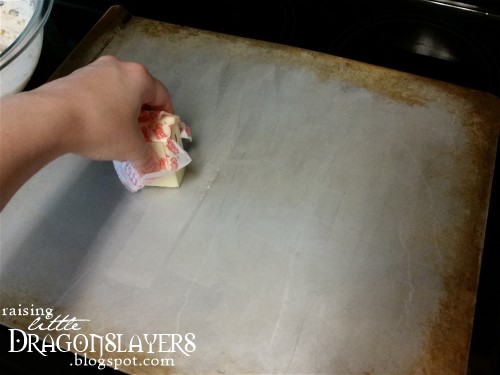 With a spoon, "drop" mounds of dough onto the baking sheet: 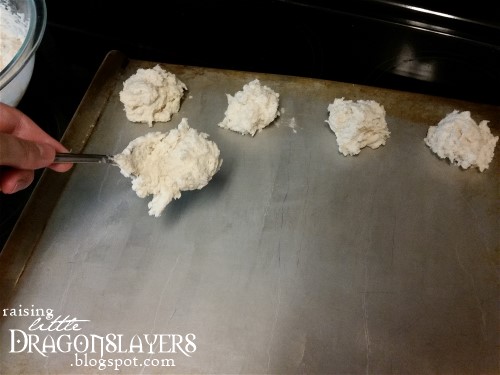 (I used a second spoon to scrape each spoonful off more easily.) 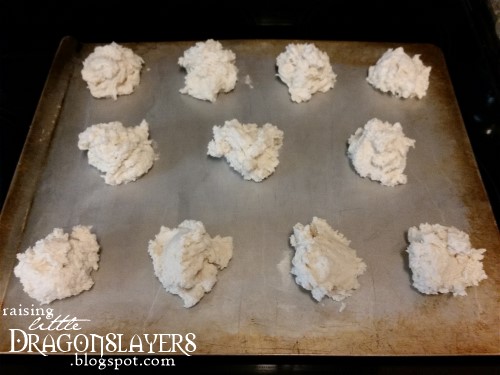 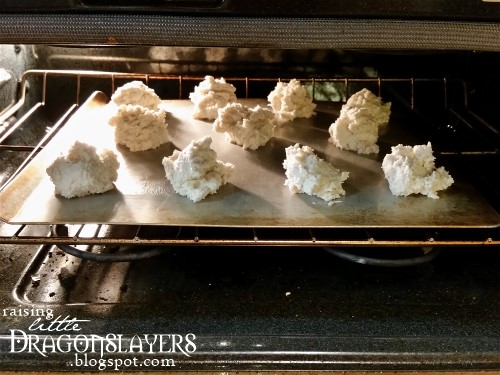 While the biscuits bake, melt the other 2 Tbsp of butter, and add the oregano and garlic salt: 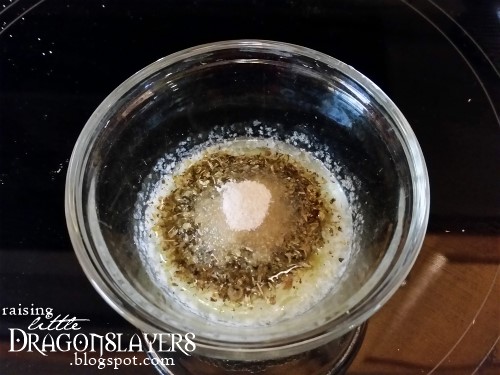 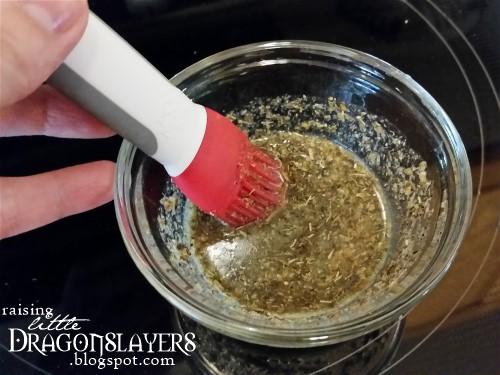 Remove the biscuits from the oven... 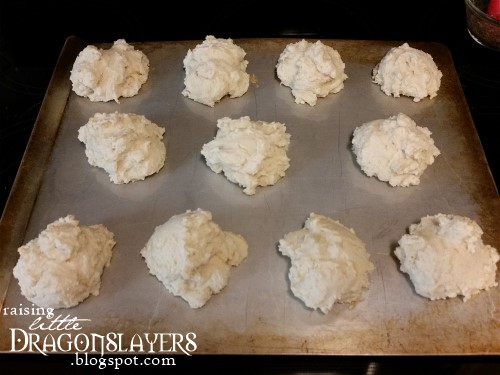 ...and brush them with the oregano mixture: 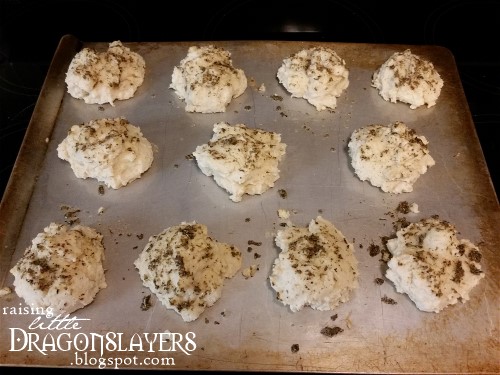 Bake the biscuits for another 8-10 minutes: 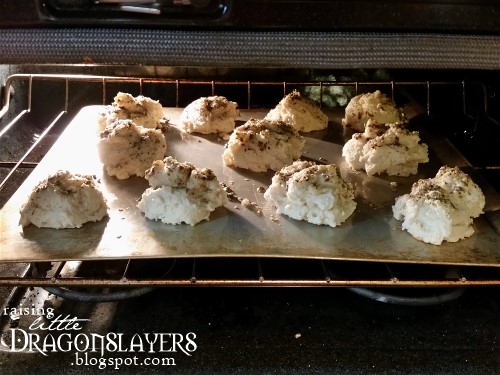 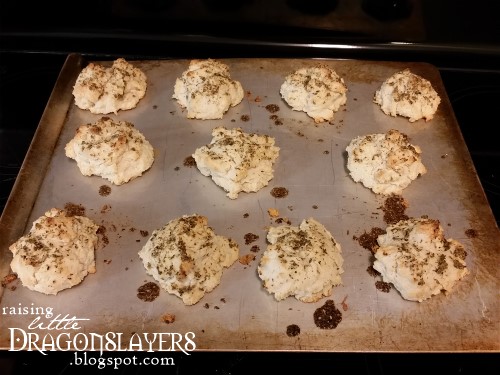 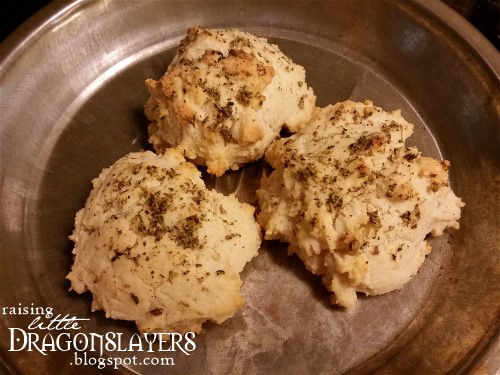 I think these drop biscuits were a great bread to end this series on--not only were they gloriously easy to make (I didn't have to set aside an entire day to schedule waiting for dough to rise to perfectly coincide with being able to photograph the finished bread during my kids' naptime!!), but they were quite yummy, too (I haven't always liked the others).  They might have been more book-accurate if I'd kept them plain instead of adding the oregano topping, or if I'd used darker whole grain flour, but I wanted to end with something I'd actually want to eat myself, yet without contradicting Suzanne Collins' description in the books.  I think I did all right. :-) 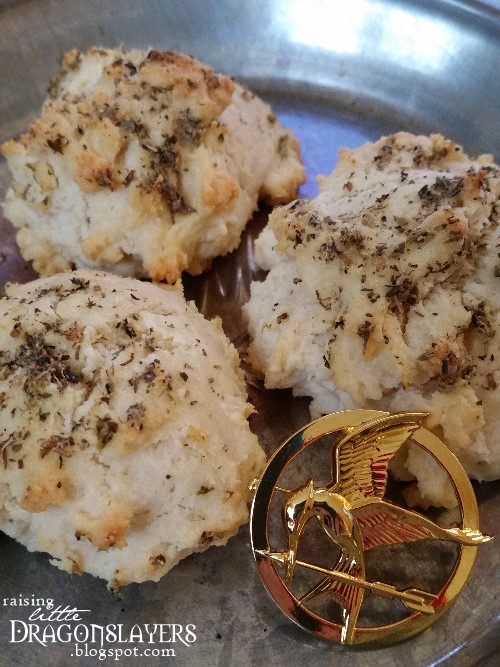 This final post contains one last Easter egg in the main photo.  Find it yet?

Hint: It's not the Mockingjay pin--like the rest, it's from a different fandom!  If you want to spot it yourself, don't scroll too far...since this is the last post in the series, I'm including the District 12 reveal at the end of the post (after the District 11 reveal, below)!

Were you able to "detect" the District 11 Easter egg?  Here's the reveal:

The "I O U" carved/bitten into the apple is a reference to Moriarty's apple in BBC's "Sherlock".  I know at least one reader caught it, and commented! :-)

And, since this is the final post in my "Hunger Games" district bread series, it'd hardly be fair to keep you waiting for the District 12 reveal--so here it is:

That's the One Ring (Lord of the Rings) tucked between the plate and the coal.

Thanks for tagging along with me through this district bread series--I've had so much fun finding and baking new breads to represent each district, and it's been a blast staging photographs that both reflect the districts and, through the Easter eggs, pay homage to some of the other fantastic fandoms that so many of us share beyond Panem.  If you try any of the district breads for yourself, or throw any epic "Hunger Games" parties, I'd love to hear about it!  And, as always: May the odds be ever in your favor! :-)
at November 13, 2015