One of the first districts to rebel against its Peacekeepers, District 8's primary industry is textiles, including clothing.  Suzanne Collins doesn't describe their bread, so I went with this simple garlic naan, which would pack well for quick meals between factory shifts.


I made some minor changes to this recipe. 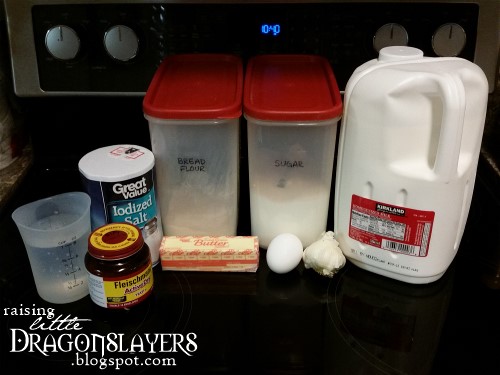 First, dissolve the yeast in the warm water: 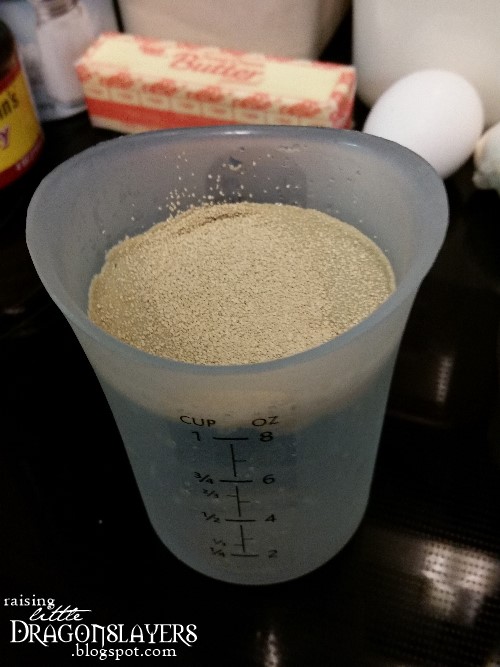 Stir to dissolve, then let stand about ten minutes, until it's bubbly: 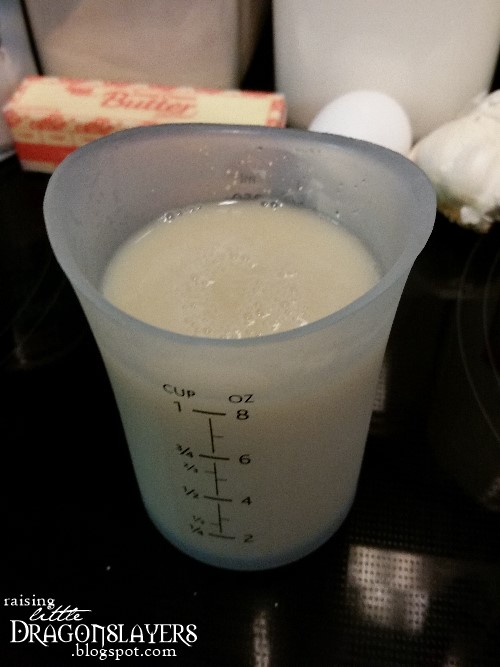 In your mixing bowl, combine the yeast water with the milk, egg, sugar, and salt: 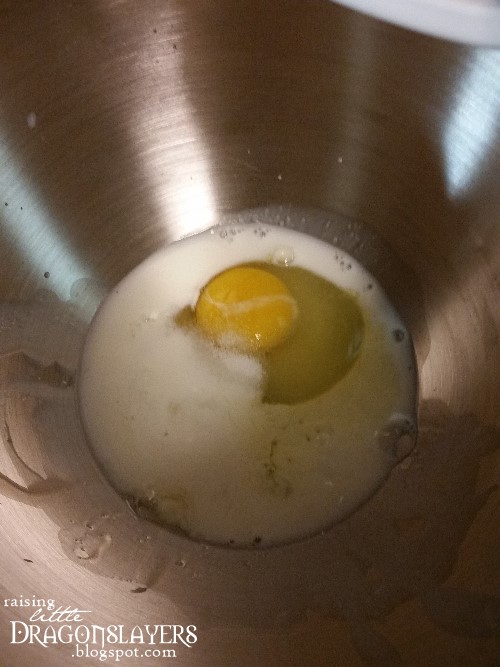 Whisk well, then add the flour in 1/2 cup increments: 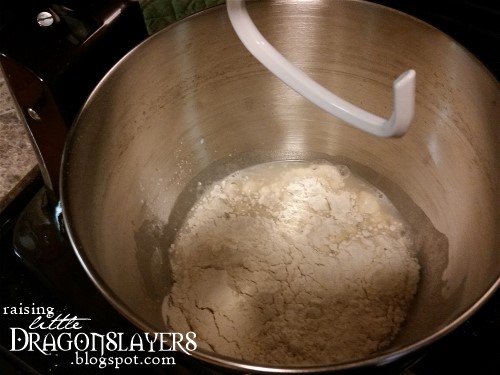 Mix well between each dose of flour: 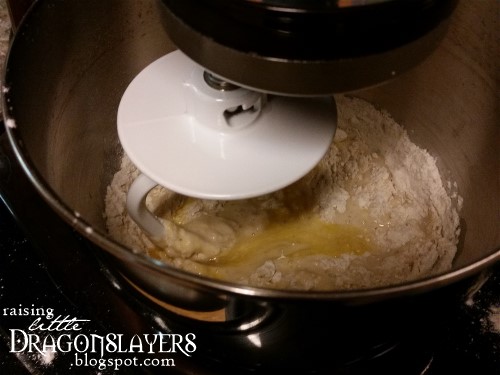 Once a soft dough forms (around four to four and a half cups of flour), continue to mix (or knead, if by hand) for a few more minutes until the dough is smooth: 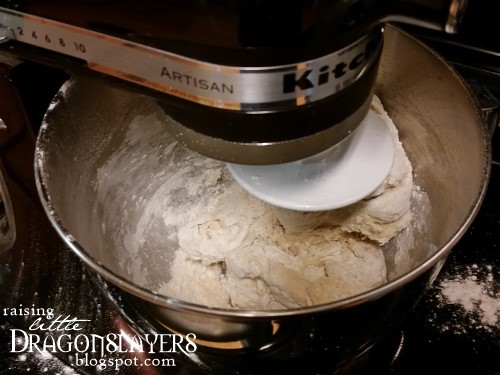 Remove dough to an oiled bowl: 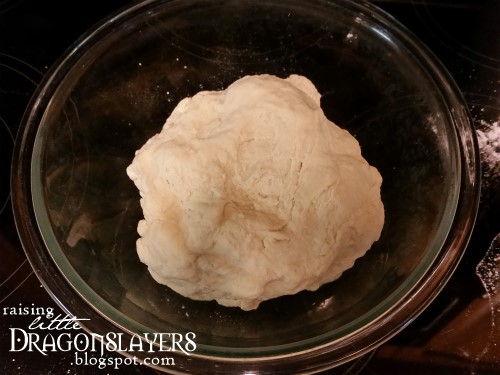 Cover, and let rise for about an hour, to double in size: 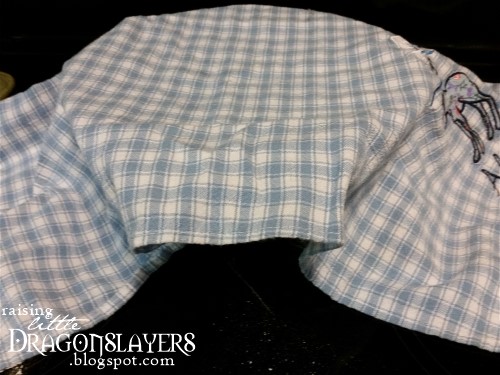 At some point while the dough rises, prep the garlic: 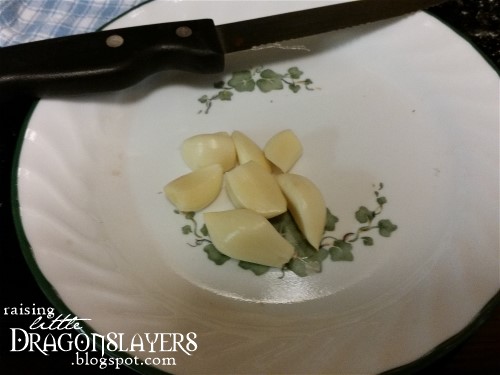 Once the dough has doubled in size... 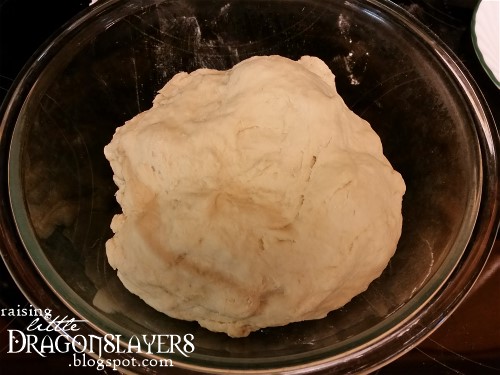 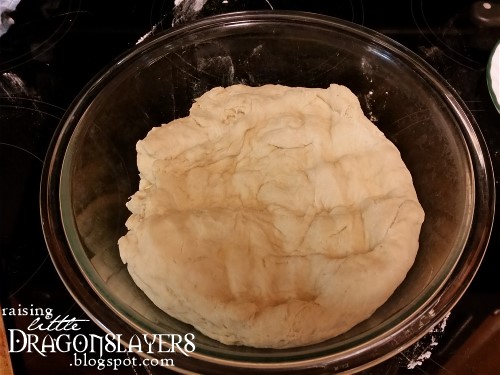 Then add your garlic: 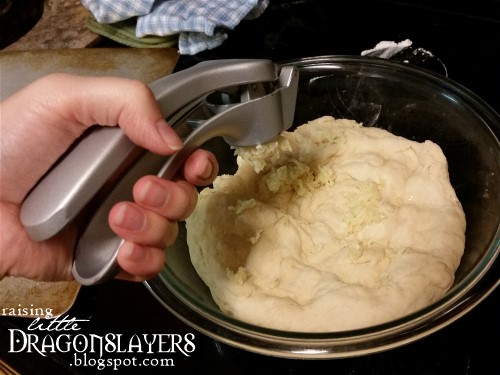 (I prefer to use my garlic press, rather than unevenly mincing by hand, because I'm bad at mincing...) 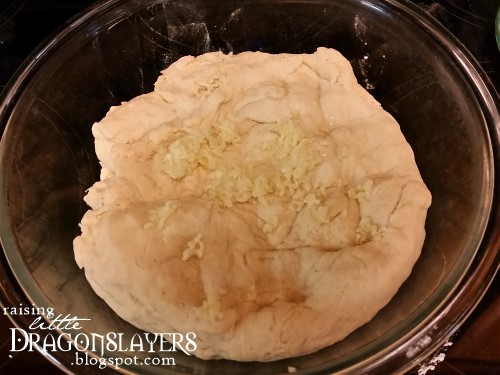 Knead by hand to mix the garlic evenly throughout the dough: 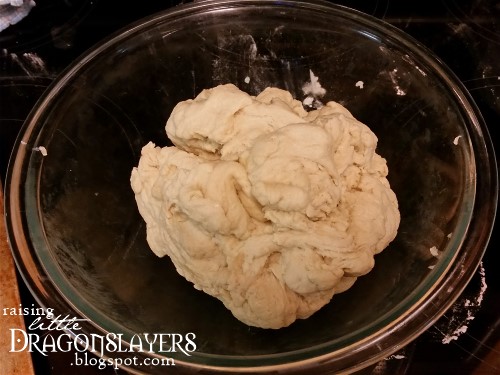 Pinch off small chunks of dough and roll them into balls.  Arrange them on a tray: 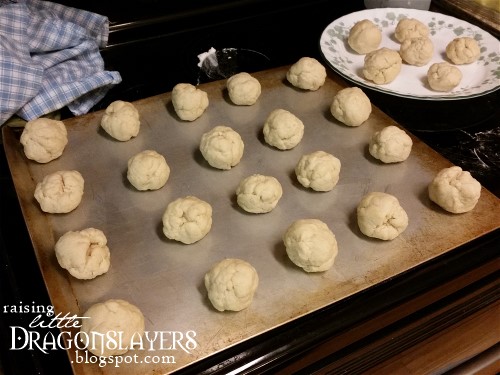 Cover, and let rise another half an hour: 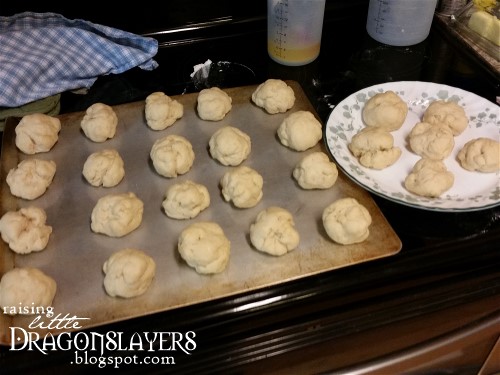 ...flatten each dough ball, while your grill preheats to high heat: 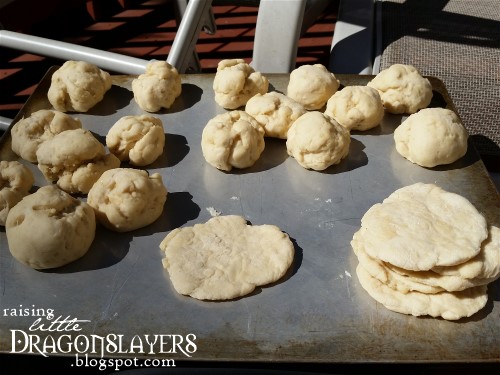 The flatter, the better.  Once the grill is hot, throw a few of your dough circles on it: When they begin to puff and brown, after two to three minutes (WITHOUT FLIPPING), brush the uncooked side (facing up) liberally with butter: 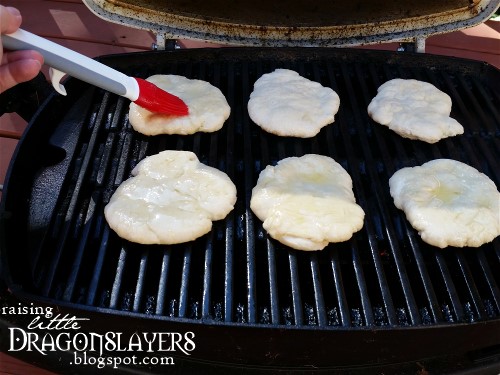 Then flip each circle, and butter the cooked side:

Let the other side cook another two to three minutes, then remove and set aside to cool: 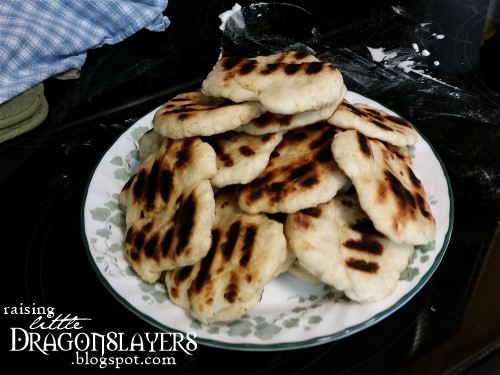 I made almost the whole batch before an apparently hungry-for-naan bee chased me off my back porch.  (I hate bees.  I can handle spiders and snakes and mice, but I have nightmares and panic attacks about bees.  Somehow I managed to go back out for three seconds to turn the grill off, but I left the open grill, with the last few naan circles still on it, along with a cookie sheet and a cup of butter, for my husband to take care of once he got home.  I'm sure the bee appreciated the all-day buffet I left for him.)  Still, I think the plateful turned out pretty well! 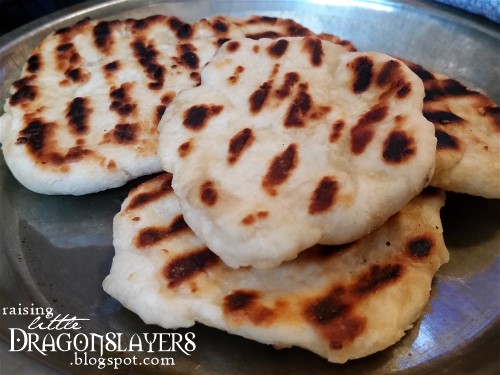 While the naan was actually pretty good, I think the store-bought naan I keep stocked in my freezer is tastier and a lot less work, so I'll probably stick with that.  Plus, no bees that way... :-P

Can you find this week's Easter eggs in the main photo?

There are three this week, and all three props are featured recognizably elsewhere on my blog, especially if you've followed my non-HG posts over the last few months... ;-)

Ready for the District 7 reveal?

The phrase "Bad Wolf", referring to Rose Tyler from season one of the "Doctor Who" new series, is burned into one of the logs, and that's Hermione's wand, from "Harry Potter", wedged between the logs.  Both were caught by readers of my last post; good eye, guys! :-)

Let me know in the comments if you catch this week's Easter eggs, or if you try your hand at District 8 naan yourself!  May the odds be ever in your favor! :-)