I was just a couple months pregnant when we moved to Atlanta in late 2012. Nevertheless, I was absolutely determined to make it to Dragon*Con the following fall. I bought my membership early (after calling their helpline with questions about bringing a two-month-old) and eagerly anticipated attending my very first con.

Of course, I would only be two or three months post-partem by then, so that meant no costumes (1. no way to know what size I'd be then; 2. wouldn't have time to make one after giving birth; and 3. not investing money in something that would only fit that one year). But, I'd be bringing Wil with me, so I could dress him up...

I wanted him to be comfortable, so it was an easy choice to keep it low-key with simple embellished onesies instead of true costumes. I brainstormed quite a few ideas across multiple fandoms. In the end, I picked ideas from five different fandoms that could be done in just two colors, so I wouldn't need to buy more than two dyes.

I'd never dyed anything before this project. I pinned several tutorials (this one and this one have some helpful tips), and researched RIT versus Dylon (and settled on Dylon powder for my project). Then I bought my materials and got started!


I bought two five-packs of white Gerber onesies (everything I read online about dyeing said to prepare for a few failed tries, so I overbought) and Dylon powder dye in brown and black.

Supposedly you can dye things in your washing machine or in a stainless steel sink, but I didn't want to risk leftover dye in my washer and I didn't want to ruin the kitchen sink in our apartment, so I used a plastic bucket that I didn't mind getting stained (it survived with only a faintly dark line where the water line was highest). I used a wooden spoon to stir everything and wore rubber gloves. You'll also need a glass measuring cup (to initially dissolve the powder dye in) and salt.


I followed the instructions on the back of the dye packet pretty closely, but used hotter water and left them in they dye a good bit longer.


After prewashing the onesies and leaving them damp, I followed the instructions to dissolve the dye, filled my bucket with hot water, added the salt and dye, and tossed in the onesies. I stirred them regularly for a good two hours or so. 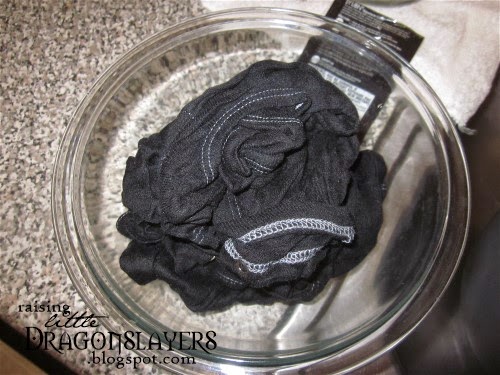 The stitching stayed white, but I like the contrast, so I was fine with that. I rinsed each onesie out in cold tap water (cold helps the dye set) and put them in a glass bowl while I dumped the dye from the bucket.


I put the bucket in the sink and filled it partway with cold tap water, resubmerged the onesies, and squeezed and stirred them around. I left the tap water running, and every time the water filled the bucket about halfway, I dumped it out and refilled it, working the excess dye out of the onesies the whole time. It took forever for the water to stay clear, but as long as I saw little clouds of bluish black puffing out under the water when I squeezed the onesies, I kept at it.


They faded a little after washing, but chalk that up to me being new at this and not really knowing what I'm doing! :-P They turned out well enough for me!