One of the things I miss the most about Indiana is Culver's. The closest one from where I live now is a good two hours away, so I haven't been to one in a while now. There are two things on the menu that I miss in particular: they have best frozen custard (I like my Concrete Mixer with peppermint syrup and crushed pieces of Heath bar), and I could eat my weight in their Wisconsin Cheese Curds.

I've really been craving those cheese curds lately. So the other day, I loosely followed this recipe that I'd pinned ages ago, and made my own fried cheesy bites of heaven (okay, so they're not as good as Culver's', but they're still stinkin' good).


They're super easy to make, and you only need a few ingredients. 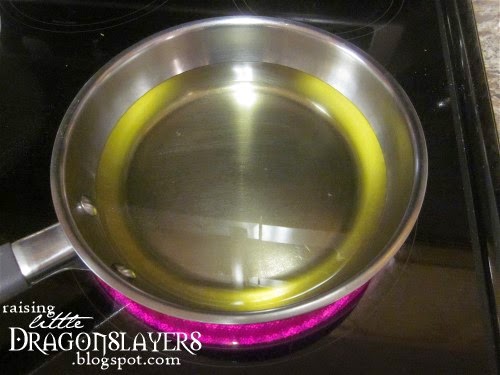 First, fill your pan with enough oil to submerge your coated bites in (the amount will vary by the size of the pan). Heat the oil on medium heat while you start on your prep.


Put the flour in one bowl, the egg (beaten) in another, and the bread crumbs in a third.


You'll need four to five sticks of string cheese. I've made these three times this week, and I used all mozzarella the first two times, and decided to experiment with mozarella/cheddar and colby jack the third time. 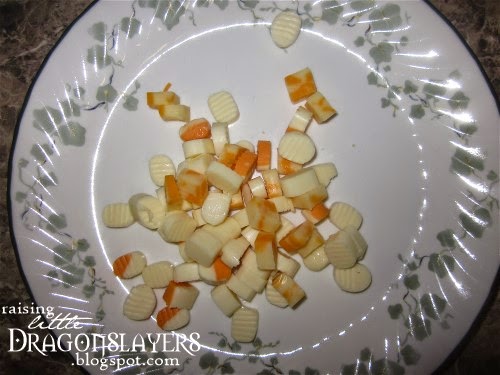 Chop 'em up! How small you go is up to you; I like cutting mine pretty small so there's more of them to munch on (yes, I understand that it's still the same amount of cheese, no matter how you cut it). 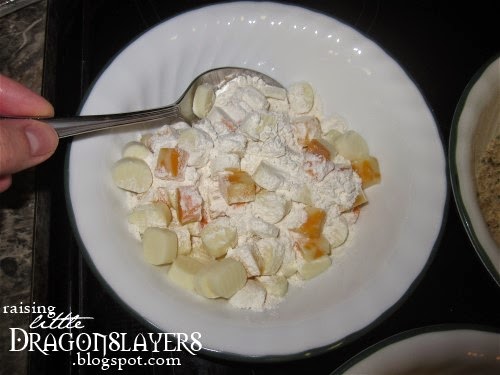 Dump them in the flour. 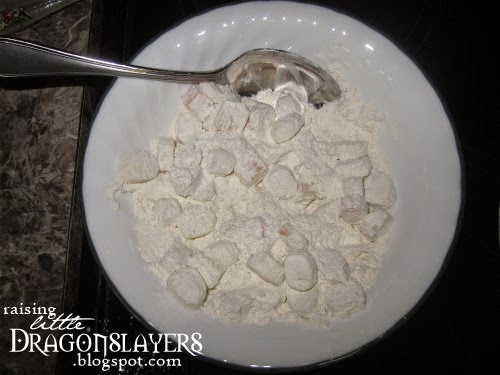 Using a spoon, stir cheese pieces to coat them in flour. 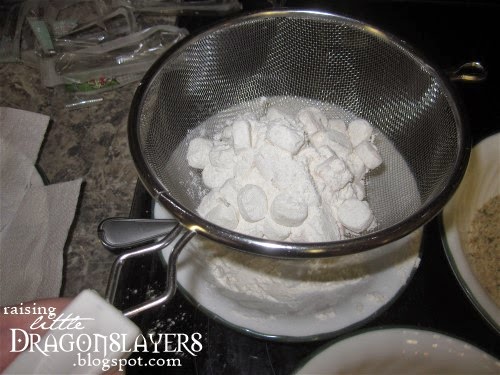 If you have a little strainer like this, use it to shake out the excess flour. If not, just use your hands: pick up each piece and shake off the excess flour before dropping it into the beaten egg. 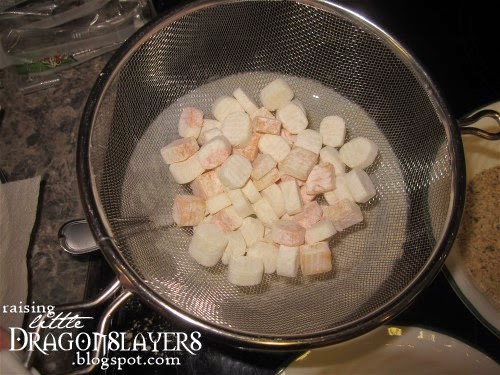 (The strainer works much better than doing it by hand.) 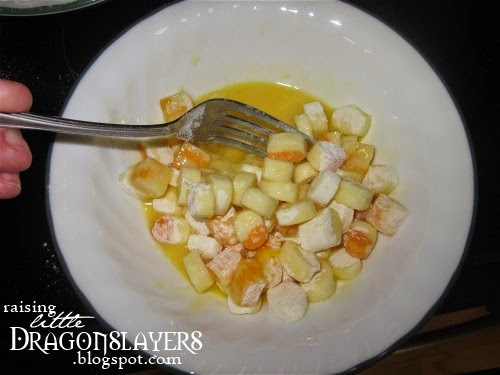 Dump the floured pieces into the bowl of beaten egg. 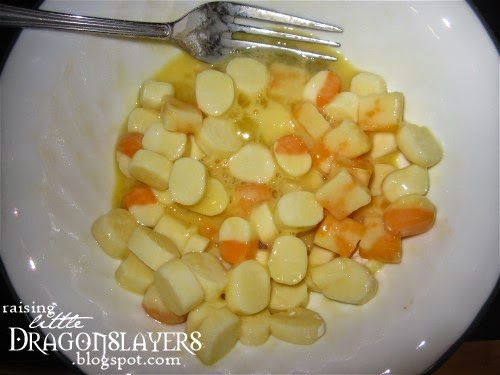 Using a fork, stir the cheese pieces to coat them in egg. 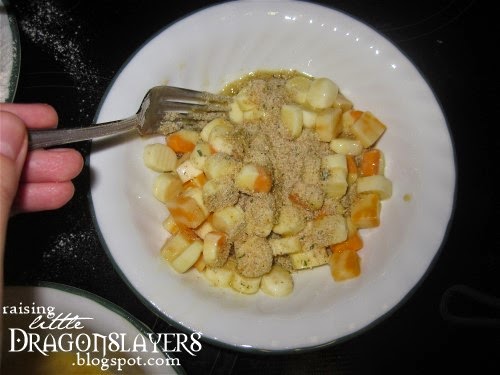 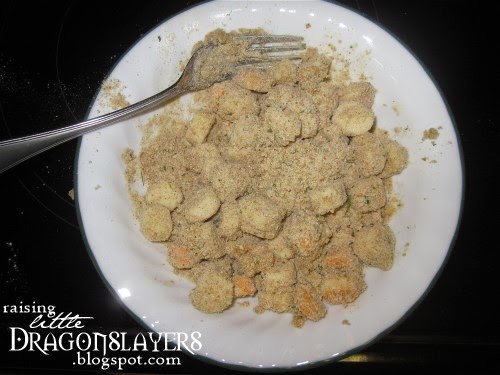 Stir with the fork to coat the pieces in bread crumbs. Make sure that none of them are stuck together; you want each piece to be coated on all sides. 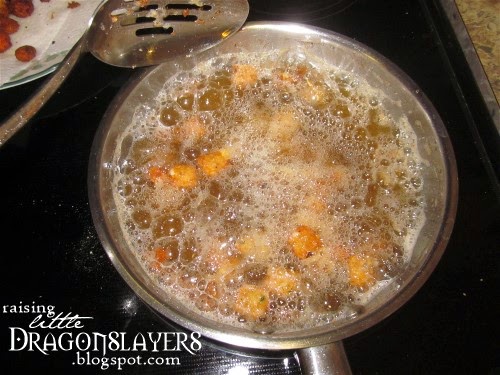 Now they're ready for frying! Drop a couple pieces into the oil to see how hot it is. If they turn dark golden brown within seconds, it's too hot--take your pan off the heat for a few minutes and turn your stove down a little when you put it back on, and then fry your bites in batches of a stick's worth or so at a time, monitoring them so they don't burn. If your trial bites stay pale (the oil should still bubble around them), then your oil's not quite hot enough yet, but you can dump all the pieces in at once and they'll fry slowly as it continues to heat. They turn out fine both ways (so long as you watchfully don't let them burn). 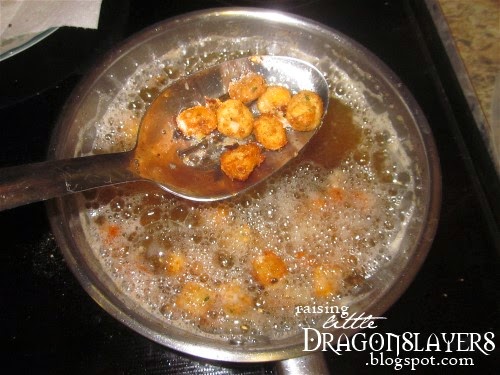 Take them out when they're a nice golden brown. 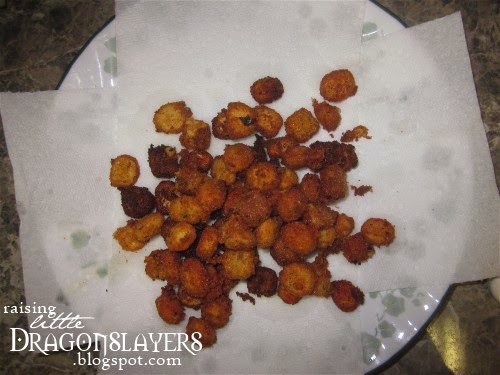 Put paper towels on your plate to absorb excess oil. Let them cool for a few minutes--but not too long, because they're best hot!


So they're not quite Culver's, but they're pretty darn good, and super easy! 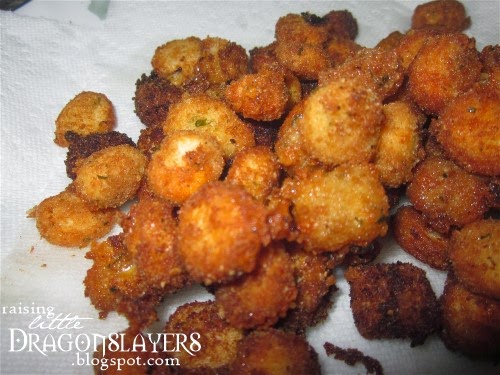 For your cut-and-paste convenience: