Once I finished dyeing my onesies brown and black, I set about embellishing them.

I bought a pack of iron-on letters (I bought them in-store, but I think they were these ones) for my first two onesies. After counting how many of each letter I had so I knew what I had to work with, I played around with various quotes/words from different fandoms and settled on "mischief managed" from Harry Potter and my favorite Doctor's catchphrase from Doctor Who.


I cut out my letters and followed the package's directions for application. By the way, lining the letters up in a perfectly straight, perfectly spaced line is about the hardest way to do it....hence me doing it for only one line of the two. Plus, I felt like it made "mischief" look more mischievous this way...


Next came my tribute to my favorite Doctor:


My letters did not come with any punctuation, so that hyphen was actually cut out from a "Q" I wasn't going to use.


Next came the more labor-intensive designs. For the next two, I bought a few sheets of felt.


First came a Captain Hammer onesie, from Dr. Horrible's Singalong Blog. I googled a few pictures to get it right, like this one:


Then I sketched a basic hammer design onto a piece of paper, cut it out, traced it onto the felt, and cut out my pieces.


I hand-sewed the hammer pieces to the yellow backing...


...then hand-sewed the whole thing onto a black onesie.


Next, I planned a minimalist Chewbacca design. Here's Chewie, in case it's been a while:


Here are the felt pieces, cut out and pinned together:


I pinned them all together, then hand-stitched the sides of each grey piece, and all along both edges of the middle brown piece.


Then I sewed the whole bandolier across the onesie, trimming the ends at angles to fit. 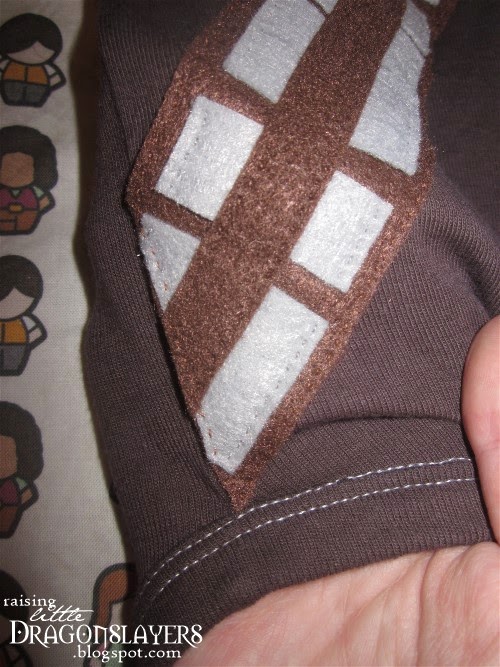 The bandolier ends at the seam. 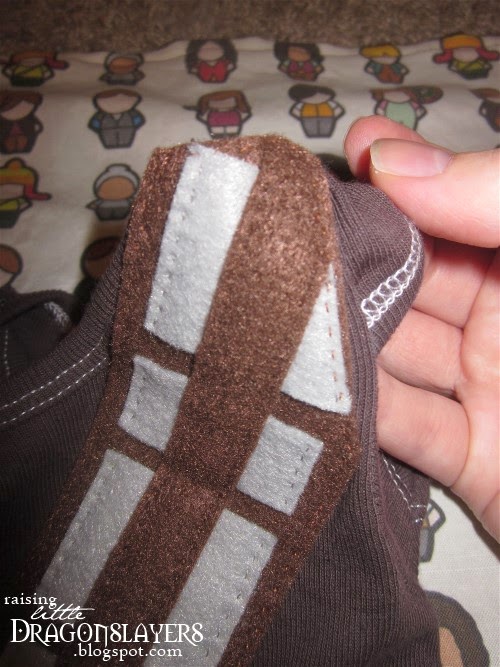 I decided to stitch the top end under the shoulder flap of the onesie, so it wouldn't interfere with the mechanics of wrestling a onesie over a wiggling baby's head.


That gave me four onesies, for all four days of Dragon*Con. But I had extra onesies, and babies do occasionally need a change of clothes while out and about (after public spit-up fests and diaper blowouts)...so I made one more.

Using this fabric, I cut out the Firefly "Serenity" symbol, leaving a small border that I could hand-stitch under before sewing it onto the onesie.


It would have been nice to find a version with the English text over it the way it's painted on the ship, to be more recognizable, but I figure any true fan would know it in a heartbeat anyway. :-)


And that concludes the making of my son's Dragon*Con onesies!


The Firefly crew background, by the way, is the minky-backed blanket I made for him. It came in very handy in the air-conditioned hotels during the con!

These were really fun to make, and Wil got lots of "awww"s and a few pictures taken, but I do want to note that these were not the most durable after the con. The felt began pilling after the first washing, and a few of the letters began to peel a little at the edges, so if you're thinking about making anything like this for regular wear, you may want to consider using a different type of fabric for the sewn on bits and maybe a fabric pen or fabric paint and stencils for lettering. Whatever. Since I made them specifially for a one-time event, it wasn't a problem that they didn't hold up as well after. They served their purpose--letting me "dress up" for Dragon*Con even though, at two months post-partem, I didn't want to spend much on dressing up myself (got by with a couple oversized Star Wars t-shirts). It was worth it!
at August 19, 2014