The perks of living in Atlanta: Part II.

Yesterday, I shared about a fun family outing we took here in the Atlanta area. Today, I'm sharing another favorite reason I love living here....

When my husband's employer first announced that they would be moving their headquarters to Atlanta, I had two immediate thoughts: 1. "That's the home of Dragon*Con!" and 2. "That's the home of Museum Replicas Limited!" Not kidding. Since then, I've found many other reasons to be excited about living here, but I'm no less excited about those two things than I was back then.

Museum Replicas Limited (MRL) holds an annual warehouse sale at their castle, which is just southeast of the city, and about an hour from where we live now. I've been drooling over their catalogs since one was mistakenly mailed to me back in 2000 (and I placed my first order with them shortly after), and I've always kind of wanted to make it to the warehouse sale. Last year was my first opportunity, so I dragged my husband and two-year-old along with my very pregnant self, and spent $20 to come home with these:


I also may have taken advantage of their 15% everything else to buy myself a pair of gorgeous knives.... 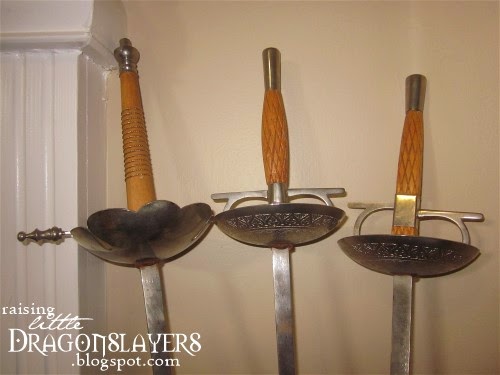 This year, I went by myself. I got up ridiculously early (especially considering that Wil was up for an hour and half in the middle of the night), and trekked to the MRL castle to get there just after the doors opened at eight o'clock.

Going early was well worth it--I snagged a beautiful rapier for what must have been at least half off, along with a $12 pirate vest (I've made multiple costumes for myself, but Casey needs something to wear to the next Ren Fest!) and four more $5 fencing foils.


They had the same three styles of the fencing foils again this year, which made me wonder how many they have and how long they've had them....Anyway, since last year, I've decided which of the three styles is my favorite, and I figured when my kids are older, it might be fun to have somewhat "safe" swords to have swordfights with (fencing foils have a ball on the tip), so I bought one for each of us. I'm thinking the kids can each decorate their own a bit if they want, too.


I'm still planning out where all my favorite swords are going in the new house--we only had two up in our old house, but I'd like to get more than that on the walls here.

Also, on a whim, I stopped at a garage sale on the way home. And look what I found for $20:


Casey and I are big into tabletop gaming (that's "Firefly: The Game" set up on the table behind my new acquisitions). We've played "7 Wonders" before (and really liked it), and "Catan" but not the "Star Trek" version. The other two--pirate game "Libertalia" and a "Walking Dead" card game--I'd never heard of, but they were dirt cheap and looked like they might have potential. Glad I stopped!

All in all, this was a very successful shopping day (of my favorite sort--sword shopping is so much more fun that shoe shopping!). I love shopping in Atlanta!

P.S. And on an unrelated note: Anyone else excited about the possibility of a Triple Crown winner? Go, California Chrome!
at August 07, 2014